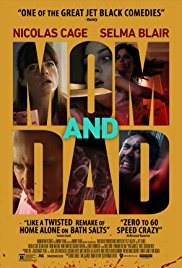 Mischievously released in the UK to coincide with Mother’s Day weekend, Mom and Dad has the kind of delicious blackly comic premise that does what horror’s supposed to do – namely drive a Firebird Trams Am through your most cherished assumptions and invert comforting social norms. No norm is more cherished or indeed, comforting, than the maternal (and sometimes paternal) instinct that’s hotwired into the brains of parents. For most of the audience it’s a given they’d wish to protect their kids from harm and their parents, in turn, worry about their safety. But in Brian Taylor’s tongue in cheek outbreak flick, imbued with the spirit of exploitation, an unknown enemy has reprogrammed suburban brains, using a TV signal to induce a homicidal resentment of little Jimmy and Joanna. Make one set of parents Selma Blair and Nicolas Cage and you have a bona fide comic blockbuster on your hands.

Crank co-director Brian Taylor handles the pandemic using the zombie template – reported incidents bleeding into grabs from character’s experiences, before finally, uproariously, moving to the house of Blair and Cage, where their teenage daughter and young son (Anne Winters and Zackary Arthur) are forced to fight a rear-guard action against their newly nonchalant and murderous progenitors.

What lifts Mom and Dad from being stylish but empty schlock is some shrewd, and for many parents, uncomfortable social commentary. How many, shifting uneasily in the audience, will dislike the movie’s early technology metaphor, that of planned obsolescence, alluding to their redundancy at the hands of, and replacement by newer models. Later, an incensed Cage, clearly enjoying himself, smashes a self-made pool table and laments to wife Blair, whose career has stalled because of her decision to have children, that the carefree, sexed-up, force of nature he once was has been reduced to a soulless breadwinner by his ungrateful ejaculatory by-products. One imagines a lot of parents, in their low moments, in the dark nooks of their brains they don’t dare probe, have felt exactly this – the erosion of their own agency and identity as family life has consumed them, and this lends extra menace (and catharsis) to the movie’s unfiltered expression of long-repressed parental resentment.

Like Crank, Taylor’s once again managed to bundle jet black humour and monstrous excess into a terrifically entertaining package. The retro-credits signal that he’s appropriating the style and lack of social refinement of another era, but that’s all to the good – not least because movies were so much more fun a generation ago. It’s a pity the kids of those filmmakers had to come along and ruin everything.

Certificate: 15 for Nicolas Cage's pool table, leaving the gas on, and Lance Henriksen.