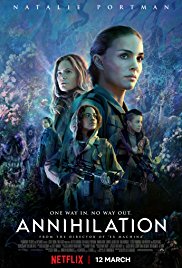 When Alex Garland’s high concept sci-fi movie flopped at the US box office, some hacks sounded the death knell for the kind of adult mid-budget movie it represents. Once upon a time, noted the doom-mongers, before the likes of it got squeezed by low-cost, high profit fare like horror movies and mega-budget, T.V trumping spectacle, like your average $200m blockbuster, a film like Annihilation – mannered and mysterious – that 30 years ago might have shared a double bill with John Carpenter’s Starman, would have done very well. Paramount’s decision release the movie in the US alone, pre-selling to Netflix for direct streaming in all other territories, suggests they too think the game is up. In future, discerning moviegoers, prepared to take a punt on an original concept, or something like it, will watch at home, leaving cinemas to the ADHD-afflicted teens and infantilised adults that now fill movie houses.

Of course that narrative, though depressingly compelling and borne out by recent box office trends, ignores the movie itself, and whether Garland’s treatment failed to entice filmgoers. Could it be that Annihilation’s female-dominated, Bechdel-friendly cast (though Natalie Portman does talk about her husband, albeit not at the expense of her own agency) of highly educated characters, turned off genre fans, skewing male, still blighted by closet misogyny? Or might it be the subdued, drowsy performances, the Kubrickian mode, designed to up the movie’s enigmatic, uncanny load, that once noticed feels like an anchor? Or could it be the muddled premise – a movie that offers a fascinating setup; an alien asteroid gives a section of US coastline cancer, mutating plant and animal life in equal measure; only to diverge at the close when that idea’s exhausted, becoming instead a hard to explain body snatchers rip off? Just how the fuck does Jennifer Jason Leigh’s scrambled cells cum alien womb incubate a double of Natalie Portman? Well, if I knew that, I’d be Alex Garland.

Annihilation, then, may ultimately be too ambiguous for its own good. It’s undoubtedly rich and intriguing, with many memorable tableaus and at least one outstanding sequence, destined to be known henceforth as “the chair and the bear”. But in attempting to splice profundity with good old fashioned schlock, Garland may have overreached. A threat with no discernible motivation may be unnerving and keeping with the cancer metaphor that frames the story, but risks audience alienation, and alienation, with all the perniciousness of an extra-terrestrial pathogen, kills business at the box office.