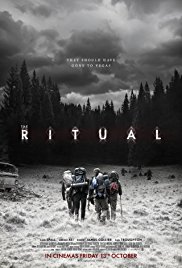 Apparently The Ritual’s based on a novel by Adam Nevill, which is odd as it plays like a one-note horror premise; a half-remembered Blair Witch Project. To cap it all, there’s Rafe Spall, the argument against nepotism, whose presence in the lead generates a charismatic black hole into which audience good will is sucked and crushed. That’s not to say he doesn’t convince as the lower middle class university friend, estuary English employed as shorthand for earthiness, who freezes when his pal is beaten to death during a supermarket robbery. He’s all too real.  But the decision to stick him and his bereaved pals on a walking holiday in Sweden, the embittered remnants of the old gang quietly seething, means we’re stuck in the woods with this charismatic void. Director David Bruckner is right to think this is a terrifying prospect but sadly there’s little more to his movie than this one mortifying idea.

The setup allows for a myriad of possibilities, some teased, that the film, giving the audience the bird, declines to develop. Bruckner’s fainthearted directorial instincts gravitate toward a simple stalked-in-the-woods monster movie, peppered with Blair Witch and finished off with a little Wicker Man-like provincial lunacy. But having seen the movie go through its predictable paces, it’s a shame the filmmakers didn’t go with the version where the horror setup was some elaborate revenge on the feckless Spall for his perceived cowardice when faced with protecting his friend. That’s a scheme we could have got behind.

The movie might have devised a full-blooded redemption arc for the gormless character – a chance to save embittered friend Sam Troughton; the one member of the group who unreservedly judged Spall for his inaction; but instead it offers a lazy alternative – the notion that Spall will redeem himself by, er, making it out unscathed (again) and telling his pal’s bereaved wife that Troughton wanted to survive and return home to her – a sentiment one imagines she’d have inferred anyway, given the alternative would be embracing slaughter by a giant deer monster and its mummified acolytes.

Consequently, Spall’s half-witted bloke loses all his close friends and staggers clear, presumably engendering the resentment of the wives and children of the more heroic friends he left on the battlefield. A strange movie then, in which the real horror is the screenplay’s lack of ambition and the irritating characters that are dispatched without care or consequence, prompting sociopathic indifference from an anesthetized audience.

Certificate: 15 for Rafe Spall's mockney accent, a giant deer with hands, and the unearned survival of Rafe Spall.