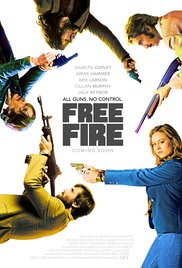 Ben Wheatley and Amy Jump have, in a very short time, become a formidable British filmmaking partnership. The duo author the screenplays and Wheatley directs with brio and technical acumen.

Following intense genre movies like Kill List and A Field in England, they’ve chosen to embrace their inner-Scorsese, going so far as to enlist the auteur as producer. But Free Fire, a ’70’s-set crime flick, though featuring the kind of hard edged undesirables found in the Mean Streets director’s early work, is more reminiscent of Quentin Tarantino at his most flippant and self-indulgent. It’s Reservoir Dogs without the tension; a mammoth feature length argument replete with exchanges of, well, gun fire. And it becomes exhausting long before the end.

The key to its failure is repetition and the constraints imposed by its game-like set up; indeed, Wheatley planned his setups and plotted, to employ a misleading term, his action using a schematic built in Minecraft. Fucking Minecraft.

Character development and tension are front-loaded; gun runners and buyers introduced and the incendiary potential established using economy in dialogue and humour before the two tribes go to war in an abandoned umbrella factory. But once the proverbial excrement hits the air cooling windmill, the movie becomes a prolonged shoot out, with Wheatley trying valiantly, though ultimately failing, to introduce sufficient variation in composition and incident, to sustain narrative momentum.

It is, alas, all enjoyable style over substance and that’s a disappointment from a creative team that hitherto found time to incorporate both.

Perhaps Wheatley just wanted to let his hair down and have some fun, imagining that bullet punctured carnage and some nicely counterposing tunes by John Denver would be enough. But light and jaunty though it is, with a cast of amusing grotesques (and Brie Larson), Free Fire plays exactly like the cultural pastiche it is.

Wheatley and Jump are great talents but their voice has always been strongest when exploring the dark heart of their own (Dis)United Kingdom. Kids, it’s time to come home and make originals rather than using the BFI kitty to knock out middle-tier Americana.

Certificate: 15 for Arnie Hammer, Sharlto Copley's voice, and a phone being connected in an abandoned factory.