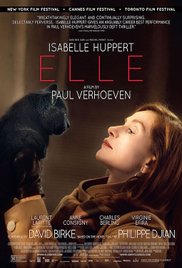 Paul Verhoeven’s penchant for violence and fucking finds its ultimate expression in Elle – a French made drama centred on rape and psychosexual headfuckery. In keeping with the Dutch destroyer’s iconoclastic bent, this is not cinema’s standard take on sexual violence. Rape’s typically treated as a plot device to precipitate revenge or provide the backdrop for a legal fight or to saddle a character with a trauma to be worked through. Elle is not interested in any of these things, rather Isabelle Huppert’s software CEO is here to give us a mediation on the damaged psyche and its warping effect on sexuality.

Characters that don’t act as you expect are always more interesting than those that do, so the protagonist’s apparent indifference to the brutal violation that opens the film, when a masked attacker breaks into her home and rapes her on the living room floor, is an immediate eye opener.

Verhoeven goes on to layer the psychodrama, piece by jagged piece. We learn that Michèle is the child of a multiple murderer, associated with her father’s crimes on account of being found in her underwear as a ten year-old, assisting with the clean-up. She’s cold toward her son’s indulged pregnant girlfriend, she’s fucking her friend’s husband, engaged in a casual relationship with her ex, and masturbates watching Patrick – her neighbour and husband to a pretty but pious wife. It’s all very interesting, more than enough for a psychoanalyst to get their teeth into. But the headline here is that Michèle does not report her rape or show any deleterious effects from the experience (her next move to tell her game programmers to up the sexual violence in their forthcoming release). She’s cold, unmoved by the attack, and seemingly unafraid, despite evidence that her rapist is now stalking her and gearing up for a new assault.

If Elle left it at that, one would say this was an unusual, enigmatic exploration of female sexuality, albeit one conditioned by the mother of all daddy issues. But Verhoeven wouldn’t be the man we know and love if he wasn’t prepared to go further and play with the audience’s moral sensibilities. Michèle’s decision to find her attacker and then, having done so, enter into an unusual relationship with him, predicated on threat, with the sense that she’s addicted to the thrill that comes with it, getting off on the violence, pushes the movie into the kind of territory that’s seldom explored on screen. It’s an immoral world, and all the more interesting for it.

It’s long at 130 mins and perhaps too talky for its own good, but Elle is a fascinating trawl though the headspace of a closed character. Befitting the title and her surname, Leblanc, she’s something of a blank canvas – a character that shows little emotion or humanity, except when remembering her killer Dad, whom, it’s suggested, she may despise as much for the life-long association as the crimes themselves. Perhaps only Paul Verhoeven could get away with making such a movie. Thank fuck he did.