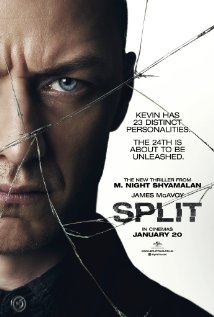 Warning: This review discusses the ending. You’re advised to ensure all your personalities have seen this title before reading.

There was a time my friends, oh yes there was a time, when M. Night Shyamalan was hailed as an auteur and composer of self-penned thrillers to rival the master of suspense, Alfred Hitchcock. Well, no one said that really, but The Sixth Sense was a monster hit and for a time the man who lensed the thing was a hot property. His grounded take on comic book lore, Unbreakable followed, of which more later, and then full-on Hitch pastiche, Signs. But thereafter the director associated with the twist ending and therefore trick plotting, had a dry spell that lasted nearly 15 years. The twist in his own career, it seemed, was that he only had two and a half good movies in him.

But this turned out to be a clever piece of bait and switch. In 2015 Shyamalan, following the rule that once Hollywood’s excommunicated you you’re consigned to low-budget hell, made The Visit, a well-received found footage movie, and suddenly his story had a surprise third act. His confidence was back and so too his ability to pull the rug out from under a game audience.

Split continues that renaissance, thankful sans any ontological gimmickry. Though more from the low-budget vault of horror producer Jason Blum, and marketed as an abduction horror movie with a great hook (the kidnapper has multiple personality disorder), this is in fact an artful suspense thriller with an unexpectedly strong psychological through-line. Shyamalan in his pomp, knew how to construct a movie, layering the plot to get the most from that final reel revelation. Here he literalises the conceit, having James McAvoy’s dominant rapey personality force his abductees to undress incrementally, giving the film an uncomfortable kind of ticking clock. But this isn’t the seedy exploitation device it might have been, rather the route to a surprise upending of the violent kill or be killed climax that typically closes this kind of movie (see Don’t Breathe, et al.).

Shyamalan’s canny appropriation of a gaudy horror plot and its conventions – underground lair, vulnerable young girls – becomes ever more intriguing as the film’s true design is revealed. It’s a genre piece careering toward an outrageous, nigh on supernatural conclusion, yet the film keeps one foot in the real world, exploring the pathology of McAvoy’s “horde” and the hidden trauma of lonely victim, Anya Taylor-Joy. The treatment, you feel, wrapping the fantastical in the psychological, is reminiscent of Unbreakable, and the comparable approach turns out to be a clue to the film’s ultimate twist. This is in fact, a stealth sequel, that teases a future standoff between Bruce Willis’s uncredited hero and the new villain the film’s created. Recast as an expansion of the Unbreakable universe in its final scene, Split’s a different beast; a film so well-designed that it turned out to have a dissociative identity of its own.

But its final shape shouldn’t detract from Shyamalan’s fascinating decision, not a word often employed when describing this type of movie, to eschew genre conventions and have McAvoy’s beast spare his prey because of their psychological affinity – both being victims of child abuse. I can’t have been the only one who wanted to know what Taylor-Joy would do or say to her abusive Uncle (still her legal guardian – and a brilliant inversion of the usual scene in this type of story where a victim’s returned to the bosom of their loving family), or how being marked as pure, on account of her damaged soul, would change her. It’s not often that a movie that promises little more than low-rent schlock sets up such intrigue in its final moments, or whets the appetite for a further encounter between ingénue and monster, but Split achieves this while delivering sustained and satisfying tension over two hours. Shyamalan, against all odds, is his old self once more.