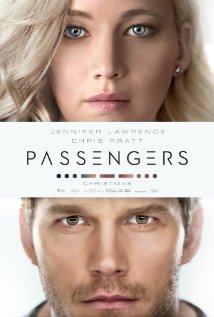 Sigh for the film Morten Tyldum’s Passengers might have been. For buried in its familiar, crowd pleasing architecture – a design that encompasses human frailty, romance and redemption, packaged with a couple of good looking leads – there’s a darker, funnier, more subversive story. Unfortunately, Tyldum and company didn’t have the spaceballs to make it.

What we get is an intriguing premise – man wakes up on colonial transport starship ninety years too early, falls in love with one of the remaining sleepers (the most attractive, natch), then wrestles with the morality of waking her and alleviating his loneliness (knowing from his own attempts that they can’t be put back under) – with an insipid follow through.

Poor Chris Pratt, we think – doomed to spend his life alone and useless with just a mechanical Michael Sheen for company. It’s enough to break any man’s moral system. Yet we’re uncomfortable as he effectively cyberstalks the snoozing Jennifer Lawrence, then contemplates ruining her hopes, dreams and prospects, by deciding her future; an act of possession if ever we saw one. But we’ve seen the trailers so we know he’s going to give in (the film’s stresses he’s in love with her brain and personality, not just her body, as that would test one’s sympathies too far). What we can’t know as the movie transitions to Act Two, is what remarkable convulsions the movie’s going to perform to redeem this indefensibly selfish act. Can a righteous crowd get past it?

But let’s give writer Jon Spaihts some credit. The easy way out would have been to have Lawrence awoken by the kind of malfunction that raised Pratt, or, as the quiet marketing hinted, have their premature resurrection be attributable to sinister on-board forces – a demented A.I, an unhinged crewman. The line, “there’s a reason we woke up early” – featured in the trailers but not heard in the film, suggests the real plot looked a problematic sell to Sony, who took the decision to trick ticket buyers into thinking that crowd pleasing alternative would be used instead. But Pratt’s resurrection is an accident and his decision to wake Lawrence libidinous – sorry, a cry for help – so here’s a film, we think, prepared to take a risk. But apparently one is all you’re allowed in a big budget sci-fi with two wallet emptying stars.

Passengers could have been a wonderful satire of online dating for example, with Pratt, having selected his mate on computer bio and video clips alone, stuck for life with a woman that once revived, is nothing like he thought and hates his guts. Lawrence does go off Pratt when she learns the truth of course, “it’s murder!”, but what an interesting and timely comment on the intangible intricacies of personality and taste, that one can only understand in close social quarters, it would have been if the movie had run with its unique scenario; how funny, given the matinee casting and audience expectations that the two would develop a space-faring romance. But Spaihts’ screenplay doesn’t dare go there.

No sooner have the sinister couple been broken, that the shape of Pratt’s redemption becomes apparent. Escalating malfunctions, impending disaster, the possible necessity of noble sacrifice – Lawrence we know, will be powerless to resist once she’s forced to face her feelings and contemplate life without her stalker. Plus, he’s sorry, so ignore the fact he manipulated her into a relationship and get off his back, you judgemental bastards.

And so Passengers delivers the climax the money men expect at the expense of intrigue and a complexed morality play. It’s eloquent design and dreamy score become indicative of its narrative style – a film that’s too clean and whimsical for its own good. There’s interesting ideas laid out that, like the 4,998 sleepers surrounding Pratt and Lawrence, never come to life.

A movie that developed the corporate theme, the commercial, stratifying cynicism of the world builders, the class divide between the two principle characters (Lawrence giving Pratt some of her expensive food is all we get), the potential toxicity of the central relationship – all would have made for a fascinating, bold and intimate spectacle. Instead, the computer programme responsible for sanding down the film’s edges delivers what you’d expect, when you’d expect it. In the end, the most surprising thing about Passengers is just how unsurprising it is. Well, apart from Andy Garcia’s full credit for 10 wordless seconds of screentime, that is.

Certificate: 12A for the easiest day's work Andy Garcia's ever done, a swimming pool that apparently can remain unattended in theory for 120 years, and the idea that a spark and a writer could afford a ticket to another planet, even in the future.