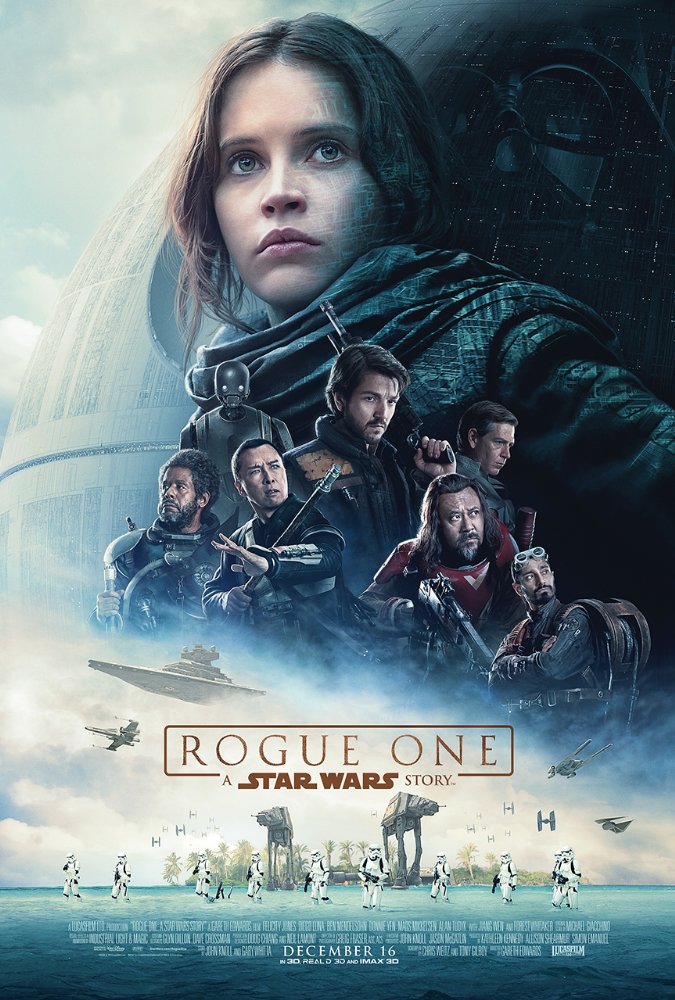 Who directed Rogue One: A Star Wars Story? Gareth Edwards? Tony Gilroy? The uncanny, creepy computer generated likeness of George Lucas, circa 1977? It matters not a Jawa. This is a successful prequel in all the ways that Lucas’s second trilogy wasn’t. It’s tonally and aesthetically consistent with the original film, sans the series’ signature wipes (a pity, there’s some great shots in this movie that demanded one). Edwards, if it is Edwards, resists the temptation to bulk it out with riffs on past glories, and the story’s original even if the beats and complications are familiar. There’s foreshadowing, naturally, but nothing egregious.

In fact, Edwards remembers where his movie sits in the chronology, imagining a universe in which the prequels never happened; a world where subsequent reveals and plot points have not been spoiled. Case in point; Darth Vader’s reveal in his Mustafa palace (what would his therapist say?). The shot both mirrors a scene with Luke in The Empire Strikes Back, as you’d expect from an idea lifted from Episode V’s first draft screenplay, while keeping the character’s true appearance obscured, complementing the iconic moment in Irvin Kershner’s film. If you’ve seen Revenge of the Sith it may all seem a little pointless, but these anthology movies have been made for those who’d rather forget the saga spoilers ever happened. Minor characters from them reappear here, but in service to the original story not the preceding episodes. These are the sidelines, the grubby unexplored nooks of this universe, and the people we meet there are of a darker hue.

Rogue One has a hard edge and inhumane bent, compared to J.J. Abrams’ Force Awakens. The fear for Disney executives must have been that a morally ambiguous suicide mission movie would sap the joy from the golden space goose. Edwards’ film rides that line, with the occasional suit sanctioned joke dropped in to lighten the mood, but very little jars. The reshoots were well documented; the join, as with the impressive visual effects, is hard to make out. Even the movie’s droid is deadpan and nonchalant, personifying the movie’s key point of differentiation – namely characters conditioned by life under Imperial rule and the long fightback, who imbue the story with a certain fatalism. The audience knows their fate of course, adding a layer of pathos. But a self-contained story in an episodic movie culture, indeed an episodic series, is a nice and increasingly old fashioned touch. Within pre-determined constraints, Edwards’ film boasts satisfying self-contained character arcs and meaningful relationships, if thin characterisation. And thank God, no conspicuous links to the sequel trilogy.

The movie’s well-structured, focused like a Death Star pulse, but inevitably, given the grunt perspective, it’s cold. What hasn’t been wholly successful is the attempt to give us a band of likable, personable antiheroes to contrast with the Empire’s glorious English villainy – a note perfect import from the original trilogy. These band of rebels are more interesting than human, and Felicity Jones’ central character, Jyn Erso, is the movie’s design flaw. It’s a risk to hang your film on a performance this lifeless. This movie needed a Ripley (and perhaps a Vasquez for good measure). By contrast, the uncanny but technically impressive recreation of Peter Cushing, here given an additionally creepy aspect by his pixelated ontology, has more personality, and the original actor’s been in the ground 22 years.

Worries about the first Star Wars movie without John Williams prove unfounded. It turns out that an on form Michael Giacchino is just about as good and derivative as Williams in his dotage. His score is a great fit for the universe, though lacking the hummable melodies and vivid leitmotifs of Williams in his pomp. Can any modern composer raise their game to match the maestro of forty years ago? With a new Star Wars movie on the slate every Christmas between now and the end of our galaxy, we had better hope so.

Ultimately, Rogue One’s a serious and occasionally spectacular addition to the Star Wars universe that only suffers in comparison to the original saga when measured by the charisma and likability of its characters. Had the movie’s chief rogue had more vitality, even a line in dry wit, this would feel like being dropped off in your childhood for a couple of hours. Instead, it resembles an old video of it. A certain generation, one imagines, will take that.

Certificate: 12A for the air shield from Spaceballs, a child with a storm trooper doll, and the return of the alien with testicles on his chin.