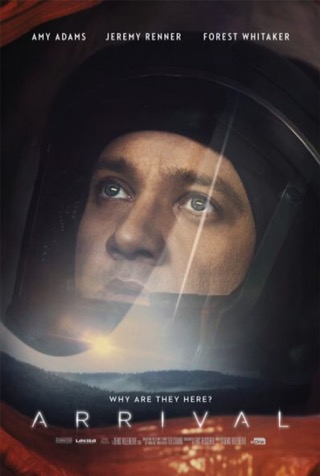 In keeping with its circular logic and narrative design, it’s appropriate that any discussion of Arrival begins as it does, at the end…which is a spoiler but one you warned about. Up to the moment we learn that Amy Adams’ linguist has had her brain and perception rewired by an alien lexicon that articulates acute forth dimensional consciousness, allowing the squid-like Heptapods, so now Adams, to see into the future, this has been a cerebral sci-fi movie about the importance of cross-cultural understanding and communication. We know it’s a serious take, because it’s shot with a somber, desaturated palette and all the performances are low key and meditative, signalling the film’s manifesto; that of thoughtful contemplation.

But once the cat is out of the bag, Arrival becomes a far more problematic, and arguably more interesting movie about predestination and choice; perhaps reverting to genre type and providing us a malevolent alien visitor after all, albeit one whose weapon – their word, not mine – is language rather than an energy pulse that incinerates skyscrapers. One could argue that Star Trek alumni Brent Spiner should have been in this movie, rather than Independence Day: Resurgence, as its grounded first contact scenario is a better sequel to his TV work than the militaristic posturing and nationalism that Arrival critiques. But still, there’s that ending, and it leaves a taste in the mouth like a pint of squid ink.

We’re asked to accept that the aliens great gift to humanity is foresight, or more specifically, foreknowledge of their lives. Learn their language and you can see into the future, as language, so the movie validating theory goes, determines the way you think; a point that allows for a political dig at the paranoid Chinese and hawkish Russians, who are quick to put their tanks on the aliens’ lawn. This beneficence allows Amy Adams to learn she’ll have a daughter with Jeremy Renner’s scientist who’ll die of cancer aged 12. Yet, rather than tell him, the disturbing conclusion has her embrace a future that only she’s aware of, apparently resigned to its inevitability (clairvoyance gives her the insight to solve the alien mystery, so if she doesn’t follow this path then a paradox is created and we don’t want to get into that).

Renner, then, has no idea that he’s going to be a Dad or that his daughter will die. Adams will tell him, long after she’s born, but that, we realise, is a little like phoning your ex years after your secret abortion. Renner doesn’t get a choice; all control of his life has been outsourced to his enlightened partner-to-be. And this is the aliens’ gift in a nutshell; the realisation that we’re all part of a pre-determined scheme and have no ability to shape our destiny whatsoever. We’re slaves to fate. Everything we’re going to do has already happened. Free will is an illusion. Adams, rather then being horrified by this, accepts it with a tearful hug and reflective stare, apparently indifferent to just how fucking terrifying a revelation this is. And how good of the squids to travel all that way to endow us with this crushing knowledge.

Of course one could argue that the aliens’ philosophy, and by extension the movie’s, is that by seeing the complete picture, we gain greater self-knowledge and appreciation for the interconnectivity of all things – or some similar regressive Eastern concept – but that ignores that whereas Adams might be grateful and welcoming, others might foresee the painful death of their loved ones, personal failures and disappointments, and feel inclined to suicide, not that you’d dare as that would upset the universe’s tyrannical design.

Perhaps the poor squids had no choice but to visit and share, as they’d already understood that was their destiny. Maybe they’re victims too. But for us humans it’s hard to escape the conclusion that Arrival, for all its commendable meditative intentions, is a movie imagined as life affirming that actually suggests that life may not be worth living at all.

Certificate: 12A for repackaging Eastern philosophy as intelligent sci-fi, the knowledge that there's no such thing as choice, and latent racism.