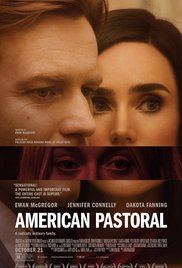 Warning: This review refers to aspects of the plot.

At a time when anti-establishment sentiment and other thought terminating clichés are firmly on the political radar, a timely adaptation of Philip Roth’s 1997 novel, a take on the collapse of post-war American idealism, toppled by its counter-cultural nemesis, and made intimate and familial so that we might connect to it and read the characters as proxies for the country under glass, is very welcome indeed.

Former college football star Ewan McGregor and his beauty queen wife, Jennifer Connelly, are an apple pie couple – earnest, industrious, aspirational, dutifully deferent to their backgrounds and optimistic about the future. When questioned about why these all-American beauties would move to a rural town beyond the New York suburbs by his Jewish Father, a cultural backwater, a bedimpled McGregor responds, “we can live anywhere we want, this is America!” In short, he’s the unalloyed optimism and promise of the post-war generation; promise that only starts to fade once the couple’s daughter, stuttering Meredith (or Merry for short; the kind of dark joke that works better on the page) hits adolescence and starts to exhibit some worrying psychosexual behaviours. There’s an Electra Complex, extreme emotional sensitivity (particularly to political events – “why don’t people have a conscience?”), anger, and godless nihilism. Connelly frets that their clever girl’s become stupid, while McGregor lapses into denial, and a few elliptical acts of leapfrogging later, the family’s looking at a child they don’t understand who at 16, becomes involved in anti-war militancy.

Roth’s story taps into the anxiety that haunts the nuclear family, ground later trod by Lionel Shriver in We Need to Talk about Kevin, that’s there’s an intrinsic flaw in what’s spun as a seemingly stable and economically viable institution, that is intangible, perhaps unknowable; a flaw that leads to unhappy, possibly even dangerous children.

Though American Pastoral’s characters exist to explore social history, the human dimension is, as ever, the key to the mystery. An early scene, in shrink Molly Parker’s office, suggests an explanation; that stuttering Meredith, far from being a normal girl with a speech impediment, has in fact evolved a strategy to cope with the pressure of following two such illustrious parents – a charge defensively stamped on by Connelly. We’ve seen no evidence of this pressure, only paternal warmth (from McGregor at least), but it plants a seed – one we anticipate will grow into rebellion, resentment and jealously. It does, and that seems to be that, except that Parker’s quack is later outed as a revolutionary sympathizer, and consequently the suggestion is made that this woman, who’s had unfettered access to Merry throughout her vital formative years, may have consciously dripped ideological poison in her ear, politicizing her consciousness, or at the very least refracting her responses in therapy through an ideological prism.

We don’t see any sessions between therapist and daughter, so her conversion from troubled tween to post office bomber remains shrouded in uncertainty. All we really can discern is Roth’s fear and suspicion of female sexuality and its potential to destablise (Connelly later has a breakdown involving impromptu nudity and an affair), evident in much of his work (see The Humbling) and captured vividly by McGregor in his directorial debut.

As a metaphor for the fractious political and social forces that unraveled American society in the ‘60s and ‘70s, American Pastoral is successful enough; there’s no clear rejoinder to the questions it asks, just as there isn’t in the wake of recent events, like the Trump ascendancy. What is clear is that there’s a chasm separating ideas of nationhood, and one’s place in it, and psychological reality, with the dominant narratives that shape the former frustrating our ability to understand the latter.

As a piece of drama, McGregor’s film struggles, and he is the cause. As Swede Levov, increasingly troubled father and standard bearer for the American Dream, McGregor lacks the gravitas and layers the part demands. He’s simply too earnest, too mannered, in a role that required depth and realism, of the type associated with vintage Al Pacino, rather than paddling in the shallows. There’s the sense that the material was just too big for McGregor the director, and that he was unable to summon the performance required to ground it. Without that ballast, his Levov seems naïve at best, empty at worst; a man who lacks the interiority that would have added pathos to the father-daughter scenes, and guilt to those featuring his increasingly despondent and troubled wife. It’s a competent production with an intriguing trajectory and unsettling, poignant conclusion, but American Pastoral the movie is, like poor Meredith, missing that vital, intangible something.

Certificate: 15 for 22 year olds who do everything, uncomfortable moments between father and daughter, and bad old age makeup.