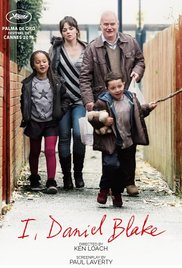 I, Daniel Blake is director Ken Loach’s inevitable reaction to six years of Conservative benefit reform; changes that have legitimised much of the electorate’s prejudices regarding claimants, and the obnoxious assumptions of those with Victorian attitudes to the poor, including the once archaic concept of the deserving and undeserving, as spearheaded by former Work and Pensions Secretary, Iain Duncan Smith.

Smith, the worst Conservative leader in living memory, became obsessed with reforming the system after he was deposed, spending time on council estates in search of a legacy order to understand the reasons some chose not to work (quelle surprise, because virtue isn’t always enough, ideally it has to pay). His research, refracted through the prism of Tory ideological thinking, lead to a pragmatic solution, universal credit – a simplification of the benefits regime that would taper off your dole money as your wages increased. But it also opened the door to a punitive and outsourced reassessment of the benefits given to disabled people or those with a medical condition that made them unable to work, and here the reforms revealed their true nature; that Smith and the government’s conscience only sparked up for those willing and able to work for peanuts.

The rest were economically inactive, potential dossers, and, because the medical profession could potentially be manipulated into signing off the able, as shirkers will do anything for a handout rather than hand up, their status would need to be vouchsafed by private assessors on government contracts, who just so happened to be financially incentivised to reduce the claimant count. In other words, the more people they denied benefit, the more profit they made.

This is the system that I, Daniel Blake attacks, and the telling has drawn scorn from wealthy commentators like Toby Young and Camilla Long, who’ve noted the margarine-thick didacticism, seen the word “polemic” printed on each frame, like a seaside town’s name through a stick of rock, and cried foul at the relentless ticking of Loach’s brain, audible on the soundtrack and tinnitus to the right wing commentariat.

The odd thing about the argument around the film, namely that it takes no risks with its presumably middle class metropolitan intended audience, whom it aims to educate and reduce to awful tears, and that the story can ultimately be reduced to its message, which threatens its dramatic integrity, is that it has currency, while missing the real problem.

Young and Long, who sound like top keywords on a google porn search, erred when they attacked Loach for playing fast and loose with the facts. They didn’t believe the film, they said (Loach stands by the casefiles under glass), because the titular Blake and the single Mum, Katie, who populate it, are too virtuous, too intellectually curious. They’re a sop to middle class sympathies, with their ear for Radio 4 and love for lifelong learning with the OU. The charge, was that said protagonists had been calibrated to stoke maximum empathy; they were caricatures of the poor, as imagined in Islington coffee shops, not the base, lazy working class Young and Long knew from documentaries like EastEnders and soaps like Benefits Street.

But Daniel Blake and Katy undoubtedly exist, amongst thousands of claimants, a small minority of whom may indeed be taking the piss. Loach’s error wasn’t in dramatising their situations, rather not being brave enough to include any characters who might represent a challenge to middle class conceptions of the deserving poor. For if the system’s wrong, and there’s plenty of evidence to suggest it is, for all the reasons Loach details, then why not make the case that it dehumanises everyone, including people we may not like, but common decency demands we give a basic standard of living?

By virtue signalling as Loach does, mechanically adding one sympathetic Job Centre worker to pre-empt the charge he’s attacking the technocratic, robot-like arseholes that job seekers endure every week, he makes the mistake of naturalising the prejudices of the electorate, rather than giving them the more challenging, but riskier “fuck you”, they deserve.

Loach is at his best when been wholly truthful, that is, engaged with characters who are flawed but doing their best with what circumstance gave them. With I, Daniel Blake, he seems to have forgotten the lesson that acknowledging the enemy gives them authority; a nod they’ll always interpret as weakness, hence the disdain of the right wing hack.

A theme works best when both sides of an argument are explored. In the case of the benefits regime, an equally valid line of enquiry would be to dramatise attitudes and patterns of behaviour created by the system, an idea writer Paul Laverty flirts with ever so briefly, when noting the black market economy created by low wages, in the form of Blake’s industrious neighbour. People who resent being processed like cattle, and outsourced to companies who they know care nothing for them, may be incentivised to cheat the system, and such a person would be as useful a symbol of the system’s flaws as a model claimant let down by mean spirited, ideology driven means testing.

Fight Club’s Tyler Durden was a terrorist who nevertheless made good points about the vacuity and emptiness of consumer culture. Trainspotting’s Renton was a smack head, whose friends were thieves and psychos; a character who fucked a 14-year-old girl and stole prescriptions from his GP, but we liked him and we wanted him to “choose life” and beat his addiction.

Characters don’t have to be saints to have valid points of view or legitimate aspirations, and often, when they’re not, we look past their flaws and to their motives, because we recognise them as fundamentally, intelligibly sound. The content of Ken Loach’s movie is fine, it’s worthy, it’s fact-checkable, and it’s important, with a timely quality that cannot be denied. But the form he adopts – using actors that give somewhat stilted, workshopped performances, giving each and every scene a weight that is felt as far back as Row K; an approach no more nuanced or layered than that adopted for Cathy Come Home, fifty years ago; ironically adds a layer of artifice that blunts the cutting observations being made.

I, Daniel Blake feels like a film that doesn’t trust its audience to intuit the truth or reject the state’s orthodoxy, so stripped out any ambiguity. That’s good politics but bad drama, and just possibly counterproductive.

Certificate: 15 for in-pub escort recruitment, pulling punches, and the London audience member who asked her boyfriend to repeat something someone said in a Newcastle accent.