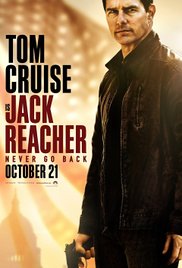 Whether you wanted a sequel to 2012’s Jack Reacher is irrelevant; Tom Cruise did, and he’s the man who makes the deals, understood? One can see why the Cruiser likes Lee Childs’ antihero; he’s tough, intimidating, uncompromising – he crushes his enemies. In short, he’s everything the Hollywood star wants to be, and is encouraged to be by Scientology. Still, it seems cruel to force audiences to partake in this power fantasy.

That all concerned recognise it as such may explain why that movie and this by-the-numbers sequel get the distinctly mid-budget thriller treatment. This is a B-Franchise for Cruise; never likely to generate the interest or investment of a Mission: Impossible. It’s for him, not us – an excuse to run around a little, beat people up, and romance another woman 20 years his junior, Cobie Smulders the latest to step into that unenviable role. Sure, she’s tough, like Reacher; that’ll quell the criticism, but she looks good in a bath robe in a seedy hotel too, in scenes where the titular character also spends quality time with the creaky plot’s great tease – a possible illegitimate daughter.

Cynics will say that Never Go Back’s family dynamic, borrowed from Terminator 2 – a surrogate partner and child for Cruise’s protector/killer, enable the vertically challenged star to spend the running time with symbols of his sexual prowess and virility. But perhaps Cruise, who’s read all of Child’s Reacher novels, and chose this one personally for the sequel, saw something else in the story; the impenetrable arms smuggling plot, for example. Or the chance to spend some time in New Orleans.

What’s harder to fathom is why an experienced and versatile director like Edward Zwick, would waste time making a film that plays like an underpowered ‘90’s thriller. There’s little here to engage the mind or get the heart pumping; the characters run between locations and get involved in hand-to-hand fights, staged without flair and butchered in editing. It’s predictable, to the point where the climatic confrontation is clumsily signalled a good half-hour early, and strangely devoid of personality; as though Cruise didn’t care whether an audience would enjoy it or not. But it’s for him, not us.

Never Go Back turns out to be a warning for both us and Reacher. It’s a film beset by curious choices. Zwick passes over numerous opportunities to enliven sequences or employ dynamism behind the camera. Danika Yarosh, as Reacher’s would-be offspring, is a curiously irritating and cynical character who, when added to Cruise’s nihilistic shit-kicker, acts like a drag on the film, tarring the entire enterprise with joylessness. The movie ends with Reacher invoking the Incredible Hulk, hitchhiking on the side of a lonely road to another adventure. Let’s hope all concerned forget to film it.

Certificate: 12A for an annoying teen, the usual guff about surrogate families, and a 30 year old plot.