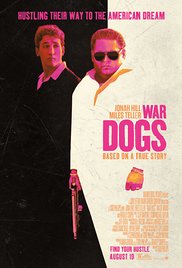 The Strange World of Hill and Teller

It’s curious that no matter how many true stories you see based on some form of gangsterism, resulting in murder, the disruption of families and federal prosecution, they all seem to resemble Martin Scorsese movies. War Dogs is Goodfellas and The Wolf of Wall Street, without the heft, or indeed, the threat. The real world criminals under glass, in this case a couple of Miami entrepreneurs whose business is dealing guns for the US government, later billed as a “significant failure in the procurement process”, are made flesh by a green Miles Teller, and a sleazy Jonah Hill. They’re interesting characters – childhood friends reunited at an opportune moment, who decide to bid for US defence contracts, then undercut their competitors using wanted terrorists and illegal ammo stockpiles, and their journey’s both wryly amusing and outlandish enough for the big screen. Unfortunately, the treatment’s so familiar that one can’t help but make unfavourable comparisons to the aforementioned master of the sub-genre.

It’s like Todd Phillips’ movie was designed by a Scorsese algorithm. Everything from the spare voice over, to the freeze frames for points of dramatic and/or comic emphasis, to the familiar songs on the soundtrack, all of which feel pre-selected, as if they were on a true life crime movie playlist somewhere and Warners got a deal on licencing them wholesale, are well worn. When the style’s derivative and the glossy photography a little too obvious, even when satirising an aspirational narrative, all you’re left with are the performances, and they’re compelling enough. Hill’s, er, larger than life, and suitably odious in a role that won’t have stretched him one bit, while Teller, as the movie’s conscience, convinces us that his true-life counterpart was manipulated into being a party to greed and corruption.

War Dogs doesn’t have a great deal to say about war itself, other than it’s an immoral business; one of the purest and worst regulated manifestations of the global market economy. We knew this of course, because post-Iraq, there’s few idealists left, and watching Hill drive Italian guns into Baghdad destroys the last crumbling pillars of the “good war” concept. Still, the movie might have been of greater interest had anyone in it unpicked the demand side of the equation, rather than milking the supply side for yaks. The laughs would be harder to come by, but it might have added more critical distance, and perhaps truth, to this true story.