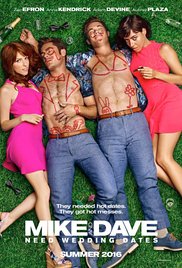 A Queen and Two Pairs

Okay, here’s the deal. When it comes to American mainstream movie comedy we’re currently in the grip of a drought that threatens to dry out the lips of even the most committed cinephile, making the very act of smiling a painful experience; so painful in fact that anticipating said agony makes the act less likely, leading to a culture that actually fears laughter. We’re not there yet, despite being closer after the likes of Paul Feig’s Ghostbusters, and Jake Szymanski’s puerile sex comedy, Mike and Dave Need Wedding Dates isn’t going to reassure you that wit’s renaissance is on the horizon, but put that lip balm away, these filmmakers have a strategy for making you comfortable with this mega dose of the stupids, and fuck me it works.

Szymanski’s plan is devastatingly simple but effective. Mike and Dave Stangle may be idiots but they’re likable fools, afflicted with child-like levels of unawareness, who live in an absurdist comic universe. By overpowering your senses with this absurdity, the filmmakers hope to break your resistance and entice you to embrace the degeneracy. That’s right, why cut to one reaction shot from Adam Devine walking in on his nude sister orgasming from the attentions of her naked masseuse, when you can cut to different takes of the same reaction four times, going in a little closer on each splice for comic effect? If you’d been a waking coma up to that point and hadn’t already intuited that Mike and Dave and their cynically opportunist wedding dates, were cartoon characters in a movie that’s essentially an improvised crude joke machine, then that climatic walk-in is the signal. Szymanski follows the same gameplan as Dude, Where’s my Car? and the like, making a movie so silly and so self-consciously ridiculous that it’s better just to give yourself to it than fight it. In the right mood, it’s a funny movie.

If Szymanski makes a Stangle-sized error, it’s following the generic template too closely and giving in to the temptation to add a little sentimentality and human interest to proceedings. He’d argue that you need those beats – the scene where Mike and Dave realise that they’re as lost and fearful as the drunk and slut who conned them for a free holiday, or the moment the losers resolve to make things right for the sister whose wedding they’ve destroyed. The audience expects the characters, no matter how un-life like, to learn a lesson, discover their conscience and do the right thing, and maybe that’s the key to durability with this kind of idiocy, but one wonders why the filmmakers didn’t go all in and jokingly pull the rug from an audience primed to accept just about any nonsense. After all, this is a movie where Zac Efron accepts Anna Kendrick’s lie that her boyfriend died three times (of cancer, AIDS and a plane crash respectively) without blinking.

You’re entitled to ask what separates Mike and Dave from all the other shouty, mostly improvised, idiot-coms that are now de rigueur, and the answer’s not much. If it were possible to know why Sisters is patience testing and depressing but Mike and Dave is not, one could also explain how identical twins with the same background, friends and education, can develop to become completely different people.

All that’s certain is that Szymanski’s film has a little something that endears it to the weary viewer. It may be Adam Devine’s gurning, or Kendrick’s desperate shtick, or just the sight of Sugar Lyn Beard being clipped in the face by a quad bike. I don’t know. But something happened to this reviewer during Mike and Dave Need Wedding Dates. One day I hope to understand what it was.

Certificate: 15 for large bush jokes, ruining Jurassic Park, and outtakes at the end.