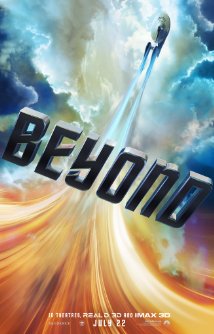 The third in the J.J Abrams produced series of dumbed down, fan-fic Star Trek movies, with the directing duties now passed to Justin Lin, has an awful lot to accomplish. For one, it exists as a corrective to 2013’s Into Darkness; a nihilistic, depressing, wrongheaded installment and idiotic would-be blockbuster that badly wore its Star Trek trappings; lipstick on a pig. For two, it’s Star Trek’s fiftieth anniversary; a monumental achievement for any franchise, but well deserved for a series that for most of its life has given its audience optimism, a progressive view of the future, philosophy, dramatic integrity, fascinating characters and thought provoking moral quandaries. The first movie in the rebooted series reintroduced scale and excitement to the Enterprise crew’s big screen adventures, the second kept the visual dynamism but abandoned any return to the more cerebral stories of old, opting instead for drool inducing stupidity. Beyond is therefore burdened with the expectation that it must revive Trek’s reputation as a franchise that talks up to its audience while delivering a story fit for a half century milestone.

If the movie falls short of either objective, perhaps that’s because no one was prepared to think big enough. For director Lin, and writers Simon Pegg and Doug Jung, the aim was to produce something evocative of the original series, complete with crowd pleasing action and broad humour. If that’s the barometer, Beyond is a moderate success; a better movie than its immediate predecessor for daring to be, in blink and you’ll miss it bursts, high-minded in the franchise’s finest tradition, and fun – no man getting his head crushed in front of his daughter here. But curiously, the closer Lin’s movie gets to a classic Trek tale – an unknown threat in deep space, a hostile planet, a challenge to the crew’s values of tolerance and understanding – the more palpable the tension between the elements that mark out Gene Roddenberry’s odyssey and the imperatives of big-budget mainstream movie blowouts.

One can feel it in Simon Pegg’s shtick and put-on brogue (James Doohan played it straight), the inclusion of tracks by Public Enemy and the Beastie Boys, the latter used as an unlikely plot point, and the nebulous motives of chief villain Krall. He’s a militaristic would-be space terrorist (another one) who sees the Federation, a peaceful cooperative, as anathema to his doctrine of expansion via armed struggle. In other words, he can’t live with the peace. This is a theme Star Trek’s dealt with on many occasions of course, most notably with the Klingons in 1991’s Undiscovered Country, but that was a movie about cold war politics, about a warrior culture that feared losing its way of life. It’s harder to understand Krall’s beef in Beyond, even when a late twist fills in his backstory, because he’s just another underwritten megalomaniac who blames the Federation for his problems, though seemingly without rational justification. In that respect he’s little different from Nero, the vengeful Romulan from Abrams’ 2009 movie; the kind of crazed lunatic, with an intangible psyche, that you slot into a generic blockbuster, rationalising that a general audience won’t think too hard about what he’s up to. He wants a maguffin, he hates our heroes, he plans to use the maguffin to attack their comrades. Got it. No further thought required.

The problem is that this is Star Trek and we expect it to be more interested in developing its core ideas and themes than that. A scene in which Zachary Quinto’s Spock, whose version lacks the gravitas of Leonard Nimoy’s, examines the personal effects of his dead older alternative self, is designed to be touching but backfires when we’re shown a photograph of the classic crew (pictured in the 25th anniversary movie, Star Trek VI). We’re reminded of the pre-reboot, pre-Next Generation movies era, when the films, though inconsistent, tackled big concepts on low budgets, rather than small stories with big budgets.

Nicholas Meyer’s 1991 movie had humour but it also had brains, political commentary, grounded humanity. Star Trek Beyond talks a good game but it’s a lesser film. The characters are close to parodies of those played by Messrs Shatner, Nimoy, et all, not least the plastic incarnations of Scotty and Chekov (outrageous accents in uniform), and the story is no greater than the sum of its sumptuously realised parts.

Not only that, but with the well-deserved critique of Into Darkness at the forefront of the filmmakers’ minds, they might have tried harder not to reheat themes from Wrath of Khan – the touchstone for a satisfying Star Trek movie experience. Once again, or for the first time if you buy into the idea that all that’s old is new in an alternate timeline, Kirk’s having an existential crisis – shifted from mid to early age, prompted by his birthday and a sense of drift. And once again it’s the fallout from a surprise attack and the resultant life and death struggle that renews his sense of purpose. It’s less conspicuously borrowed this time, but it reminds us how reliant, pun intended, these Abrams-verse movies are on their predecessors for raw material. The derelict U.S.S Franklin flying again is not a bad metaphor for Beyond’s repurposing of the old to save the day. General audiences won’t notice, Trekkies are flattered by allusions to classic stories, but both lose out because the film on offer doesn’t take a risk on something new or profound. Safe plays well enough, but didn’t Jean-Luc Picard once remind us that the sky’s the limit?

So Star Trek Beyond is a fiftieth anniversary movie that’s beautifully realised, in terms of its grandiose visual effects, but lacking strength in depth and a story with sufficient scale to do justice to such an important milestone in the history of one of sci-fi’s most enduring properties. The plot’s serviceable – intriguing setup, slightly plodding second act, bombastic finale, but that’s by the by. “Things have started to feel a little episodic” notes Kirk in his opening log – a joke, typical of the self-aware sensibility of the rebooters, that inadvertently tells the story. Star Trek deserved bigger and deeper on its birthday (as the good captain said to the girl at starbase), instead it got competent and inoffensive. That’s the best you’re going to get until the money men have the courage to embrace the series’ real audience, and make converts of the casuals with their ambition.

Certificate: 12A for an alien on a planet in deep space that likes Public Enemy, corrosive mucus, and Kirk's dirt bike gambit.