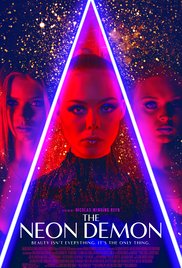 Following Drive and Only God Forgives, cine-agitator in chief, Nicholas Winding Refn (self-styled as NWR on signed title cards), returns with another full bucket from his bottomless well of inhuman torment. Anyone hoping NWR would lighten up or challenge himself to make a feel good movie, will surely be disappointed. The Neon Demon finds the perfect subject matter for his brand of retro-infused exploitation – the fashion industry. It’s the perfect partnering of form and content; highly stylised inhumanity dressed up, pretty as a photoshoped picture. The movie becomes self-reflexive as a consequence, total cinema (pure feels like the wrong adjective). As ever with Refn, the challenge is to look away, walk out, turn your back on the ugliness, but you liked it well enough when the emaciated girls stared out from the pages of your glossy magazines. Now, says Refn, let me overpower that bit of conditioning with that cultural standard pushed to its logical conclusion. What’s that, you’re caked in your own vomit? You’re welcome.

Elle Fanning, whose heartbreaking youth and innocence is the crux of it, is Jesse, a would-be model who’s run away to L.A in the hope of becoming the pick of top designers and the darling of international catwalks. This is a seedy, dream-like reality where the bulbs from photoshoots sound like thunder and long takes and slow line readings force you to linger on uncomfortable imagery and uncanny, creepy conversation.

This is a Los Angeles David Lynch might recognise, but Refn’s not interested in a cautionary tale about getting mixed up in a culture where men, indulging a quasi-paedeophilic impulse, violate and repurpose young girls while teaching them to hate themselves; there’s no cathartic eureka moment with Fanning declaring she doesn’t need this shit, so will return to the wholesome and honest surroundings of her small town. Instead, Refn, who to his credit refuses to moralise, explores what happens when a girl like Jesse is seduced by the veneration and dares to believe she’s the precious object that’s been manufactured. A dazzled Alessandro Nivola, having plucked Jesse from the also-rans on the circuit – girls so desperate to imbibe what she has that, in a foretaste of the no holes barred climax, would suck from her bleeding hand – tells her that her beauty’s innate, that she’s rich in the only currency that matters. She believes it and rejects the boyfriend whose plot function would normally be to act as proxy for the audience’s values; an honest John to run back to when it all goes south. He leaves and we never see him again. And from there there can be no escape, no redemption.

From there Refn goes to places that other filmmakers would reject on grounds of taste, morality and commercial appeal. We’ve become accustomed to his stark photography, the vulgarity, the twinkling synth from his composer Cliff Martinez, that recalls Eighties’ excess. But to give the man his due, he can still surprise us with the power of a conceit – a joke so morbid in this instance that it threatens to alienate even his most staunch supporters.

Jesse is beloved by Ruby, her moist-lipped makeup artist, a woman who idolises her so completely that her second job as a touch-up artist for the recently deceased takes a literal turn when a woman, reminiscent of the model, ends up on the slab. In some movies that would be the climax, but here it’s just foreplay. When Ruby’s rejected by the virginal Jesse, who’s self-aware enough to realise that purity is fundamental to her appeal, she unites with a couple of jealous, sculpted models – women who’ve been brutalised by expectation into trying to attain what the new girl has naturally – and commit, what else, an act of murder and cannibalism; a need to internalise Jesse’s apparent majesty that’s so potent that a regurgitated eyeball is simply picked up and gobbled by another killer.

It’s about as shocking a resolution as you’re ever likely to see but, on the movie’s terms, it’s also persuasive. Why wouldn’t a group of women – unloved, reducible to their flesh, desperate to attain a perfection that in nature is rare and cannot be achieved artificially, want to both destroy and consume a person who both symbolises their dream state – an important style-metaphor in Refn’s picture, and marks their enslavement? That, I’m sure Refn wouldn’t mind me saying, is meaty cinema. Sadly, unfashionable in this day and age.

Certificate: 18 for a sleazy Keanu Reeves, gold paint, and an eye for detail.