Film Review: Our Kind of Traitor 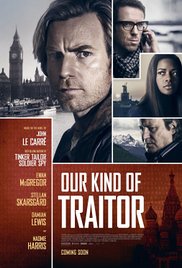 Is Our Kind of Traitor your kind of movie? Well, that depends on how you like your John le Carré adaptations. If you take them stylish and ever so slightly mannered, with characters like Damien Lewis’s MI6 section man, imported from an old Bond film, then you may be tempted. If you like your espionage discursive and backroom based, but light on thrills, with tension built in moments of subterfuge in colourful and/or interesting European locations, while brutal, tattooed, mafia hood types circle nearby, you’ll be inclined to make time for Susanna White’s effort. And if your constitution is such that you can cope with Stellan Skarsgård’s genitals writ large on the big screen, this will surely make your to-see list. Everyone else will file this under middle ranking le Carré and seek out Tinker Tailor Solider Spy or the BBC’s Night Manager instead.

That’s not to say that Traitor’s poor. As foreshadowed, it has plenty of underlying menace and atmosphere, not to mention gloss, thanks to White’s artistic eye. But it’s really a movie rooted in the central relationship between Ewan McGregor’s fractionally improbable Poetics Professor, and Skarsgård’s self-proclaimed “number one money launderer for the Russian Mafia”, an oligarch with a pretty family, who he rightly imagines will be murdered once he’s handed his cream from the fall of post-Soviet capitalism to expectant gangsters. Skarsgård eyes McGregor in a restaurant, while the latter’s on a relationship saving holiday in Marrakesh with lawyer wife, and largely decorative supporting character, Naomie Harris. The Russian asks McGregor to pass information to British Intelligence, and in so doing, the curiously righteous (but apparently adulterous with a taste for very young women) academic gets sucked into the operation to set up his defection.

Fine, but McGregor’s Prof is such an anaemic and inanimate character, that it’s very hard to invest in him, particularly when he’s inducted into the proverbial nest of vipers. It’s clear that White’s much more focused on and interested in Skarsgård’s affable but combustive go-between and his attempts to save his gene pool. Perhaps it was written that way, (Tom Hiddleston’s similarly ensnared Night Manager was also a bit of a blank), but a reverent translation, if that’s what it is, makes the movie lopsided and robs the audience of an inspiring proxy.

When all’s said and done, and the movie’s gone through its enjoyable if slight paces, the only abiding mystery is the attribution of Jeremy Corbyn’s Islington North constituency to another but surely not coincidental Jeremy, Northam; playing a corrupt MP with former ties to the Soviet KGB. Are the filmmakers, mirroring their on screen counterparts, trying to slip us a message? Labour’s press office declined to comment.

Certificate: 15 for bad tennis, man meat, and the world's most unfortunate engine failure.