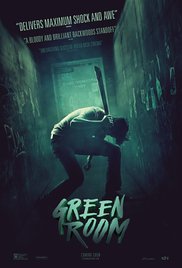 From Blue Ruin’s Jeremy Saulnier, comes Green Room, not just a shift in the colour spectrum, but a fresh spin on the former noir’s potent themes – everyman protagonists up against a barbarous foe, middle class America facing its worse fear: racist blue collar psychopaths. Saulnier’s follow up offers the delicious promise of a hard rock band interned by the owner of a Neo-Nazi venue and his acolytes and targeted for discreet extermination when they inadvertently witness a fatal stabbing.

White Power area commander, Patrick Stewart, chillingly nonchalant about killing his booking and making it look like they died elsewhere and by others’ hands, though it’s clear he’s assuming a certain investigative laziness given their impressive suite of injuries, sports a menacing drawl and racist vocabulary. When a character’s this indifferent to your survival and his employees this practiced in disposing of brutalised corpses, you’ve good reason to be nervous. Anton Yelchin plays that wretched part well; a jobbing musician who’s forced to become more rock and roll than his secret pop-loving heart ever dreamed. Be careful about flaunting your punk credentials, says Saulnier, lest someone takes them seriously.

All of which may sound ugly and inhuman, but Green Room may be one of the best written movies you’ve ever seen built on a schlock premise. Saulnier’s a very adept filmmaker, who knows how to use his tools to densely pack character information into each frame and generate a certain mood.

In the run up to the band’s incarceration, we’re saturated with calming green – in landscape, using filters; a proxy for a group of characters for whom rage and discontent is an affectation, their songs a pastiche – the musical equivalent of the vintage TV and vinyl record player in Yelchin’s apartment. Later, when the band meet real nihilists with a genuine ‘fuck you’ attitude to law and order, Saulnier’s ground work really pays off. We can relate to the band and their artsy, rebellious shtick, so feel their fear when forced to fight a rear-guard action against true social discontents.

It’s not a perfect movie; the backstories between certain characters get a little opaque as the plot escalates, but it’s an undeniably tense and often bloody spectacle, that refreshes that most hoary of horror tropes, teens trapped in a woodland cabin, and makes it new by investing both hero and villain alike with a semblance of psychological credibility. It’s savage and uncompromising until the very end; the epitome of movie rock and roll.