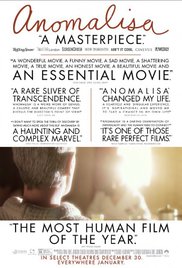 Charlie Kaufman’s animated movie is a meditation on loneliness and sense deadening conformity, with a glacial pace to aid introspection. If David Thewlis’s Michael is photographed to look like he’s walking through treacle, it’s to underline the point that life for the customer services guru (an accolade to match grand master of solitaire) is a slow trudge. But animation does more here than literalising lethargy, it allows you to have a world that’s both grounded and uncanny; a heightened reality in which the two leads give touching and at times unbearable natural and intimate performances, surrounded by identikit characters who, male or female, all sound like Tom Noonan.

It allows for a man whose face is built from delineable parts – jaw, eyes and hairline – seeing the pieces come loose as his sense of self becomes more fragile. In a film where Michael and Lisa’s unique faces are proxies for their individuality in a world of robotic, cookie cutter people, losing those individuating bits matters. Little wonder that Michael’s drawn to a clockwork Japanese Geisha sex toy with half her face missing; going through the motions, fucked to the point where the mechanics are clearly visible. The toy even has a bit of pre-programmed spiel; uncomfortable for the burnt out company man on a speaking tour.

What’s refreshing about Anomalisa is that it resists to temptation to be haughty, given its impassioned plea for individualism and original thinking. Kaufman’s aim is to hold up a mirror, not beat off his imagined bookish audience. Michael’s a tragic character, whose sense of dissatisfaction, we learn, runs long and deep – in fact, at least to the end of a relationship he walked out on a decade previously. If he needed something more then, it’s clear he hasn’t found it in the intervening years, opting instead for rote domesticity (a wife and child he has no emotional connection with) and a career in which he teaches mechanical thinking to customer service drones in middling service jobs. We’re presented with a man who desperately wants colour and excitement in his life – points of honest differentiation, but when he gets it, the movie pleasingly opts for emotional and psychological realism over crowd-pleasing and ego warming wish fulfilment.

The eponymous Lisa, (the title’s a portmanteau of anomaly and Lisa, recognising her stark derivation from the other people in Michael’s life) is manna for Michael while she’s novel, but what’s new and mesmerising one night is old hat by morning. Before the coital juices are dry on the hotel bed, joyless Michael, whose cynicism, self-importance and controlling instincts run deep – the engine, we imagine, of his profound alienation from others, is already finding fault in Lisa’s behaviour, being irritated by her hitherto charming imperfections, judging her against the anonymous standard he’s grown to despise.

It’s an aside that acts as the movie’s grand special effect – a single moment that manages to capture, with great fidelity, the cognitive dissonance, self-deception and lack that constitutes a great many people’s unhappiness; the sense that they should be more than they are, that the people around them – boorish, middle of the road, content with their lot, rob the aspirant intellect of its nourishment. The paradox, Kaufman knows, is that if those so minded got their wish, if everyone was an avatar for their wishes and desires, they’d be puppets. When a movie can speak truth to life this way, in a short conversation over a hotel breakfast, it’s a finely crafted thing indeed.

Certificate: 15 for puppet sex, hotel atmosphere, and cab drivers who talk too much.