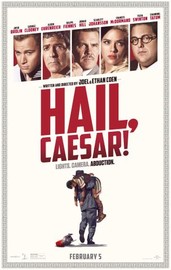 Acolytes of Joel and Ethan Coen’s brand of offbeat whimsy will find much to like in Hail, Caesar!, a touch of Hollywood studio nostalgia seasoned with their requisite kook. With symbolism so stark you could peel off it off the screen, the movie tracks the spiritual crisis of 1950’s movie fixer, Eddie Mannix, played by Josh Brolin, who wrestles with problems on a number of productions, including potential starlet scandal, a miscast matinee idol, and a star’s abduction by a group of communist intellectuals, while considering a move to the less fantastical lowlands of corporate America.

Not for nothing is Brolin a man who goes to confession over minor transgressions like enjoying a cigarette against his wife’s wishes; his is a soul in crisis. Of course, say the Coens, the point, as Brolin comes to realise, is that movies have become America’s new religion, and the empires of old – the church, Rome, are just sausage meat for the factory. Embrace the movies, says this movie about old movies, and know that the industry and its popular myths are the 20th century’s totems, and that to be the bag man for the studio in such an era, was to be as close to godliness as is possible.

Those enamoured by the quaintness and charm of Hollywood’s so-called golden age, will enjoy Caesar’s affectionate peak behind the studio curtain, and the fun extended cameos that grace each production, notably Channing “Chatum” Tatum, in a sailor musical, Ralph Fiennes as the imperious director of prestige melodramas, and Scarlett Johansson as the graceful movie starlet with a graceless off-camera persona. There isn’t, alas, much more to the Coens’ movie than that; it’s a valentine with their usual pseudo-intellectual embellishments – prestige ensemble comedy.

Indeed, all the usual suspects who like to be associated with this kind of thing, as it shows they have a nice line in self-deprecation, as well as a fine sense of the absurd, are all present and correct. There’s George Clooney as the box office star in the Kirk Douglas mode, wide-eyed and mugging, Tilda Swinton in a double role as two English scandal hunting journalists, the aforementioned Fiennes doing his very best debonair dandy, and a turn from Frances McDormand as an editor who nearly dies when her tie gets caught in the film gate.

Hail, Caesar’s gently witty then; an old-school caper with period framing and transition conventions, and a light smattering of postmodern superiority. Audiences are entitled to ask if it had to be quite so inconsequential, essentially a glossy diversion for movie buffs, but what do you want? Style AND substance?

Directed by: Joel and Ethan Coen