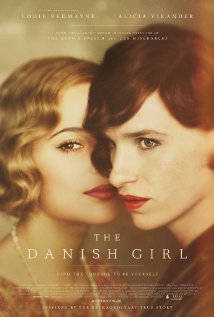 Another January, another slab of awards bait starring Eddie Redmayne. This year he’s courting superlatives like “brave” and “inspiring” playing the 1920’s Danish landscape artist Einar Wegener, amongst the first people in the world to have gender reassignment surgery. Tom Hooper’s film, which takes no artistic risks whatsoever – a movie compromised of tasteful compositions, muted colours and beautific strings and ivory tinkering from Alexander Desplat – is a sort of transgender origin story, then. But the title could and perhaps does refer to Wegener’s wife, Gerda, whose tale this also is.

Played with sensitivity by Alicia Vikander, she’s the focaliser for the couple’s experience. As she puts it to a male subject (for she too is an artist, only one interested in people not, ahem, topography), the man submits to the woman’s gaze; a man that of course, becomes a woman, or indeed the aesthetic simulacrum of the same, the matter of what goes on internally, in the brain and the soul, being a debate for identity politics, biologists, neuroscientists and, depending on your beliefs, God. A debate the movie sidesteps in favour of a focus on Einar and Gerda’s relationship. We’re reminded that the latter’s lost a husband, Lili, the female persona, declaring him dead, while the former attempts to keep his legal wife close while stripping the intimacy and sexual dynamic from their relationship.

Hooper’s film is a little too neat; it underdramatises, even ducks the explosive dramatic potential of the scenario, keen to signal its virtues and smooth the audience’s path to an emotionally satisfying resolution. Of course it’s gratifying to see Gerda support Einar/Lili, once their sex game, involving dressing him to mimic her female subjects, then taking him out as Lili, cracks the dam and leads to introspection and realisation. But one wonders if a heterosexual woman in a traditional partnership, even a member of the free loving, decadent artist set, would be quite as understanding of her man dating a homosexual (another fleeting role for bit-part man, Ben Whishaw), then disavowing his former existence, as Vikander is here.

Sure, there’s tears and frozen looks, but by and large she’s dutiful and understanding to a fault, even to the point of resisting the attentions of Matthias Schoenaerts, as Einar’s childhood friend who spots a gap in the market and moves to fill both it and Gerda. Indeed, the presence of this character, waiting in the wings to provide the rejected wife with male companionship and sexual interest, is arguably a sop to an audience that might reject Redmayne’s Lili if the cost of her emancipation were the effective widowing and loneliness of a decent and loving wife, who supports her husband’s transition despite her society’s embryonic understanding of what it means and why it’s happening.

So the movie doesn’t linger on the medical details (quacks brand Wegener mad, homosexual and schizophrenic as he does the rounds), rather the struggle of both partners to come to terms with their new reality at a time when society, even a quasi-liberal one like that of the Dutch, has no name for what Wegener feels he/she is. There’s talk from Lili of “real women”, and an emphasis on aesthetics and the cultural condition of being female, with the altered artist embracing chivalric deference, a more aesthete sensibility partnered with material goods, and worryingly, from a feminist point of view, the junking of aspiration, “I want to be a woman not a painter”, making this, ironically given its ostensibly bold subject matter, a timid exploration of gender identity. Perhaps given the period setting we couldn’t expect any more, but given the liberties the film takes with biography, there’s the sense it could have pushed the audience further, challenged their preconceptions, instead of making this the simple story of one side of a binary flirting with the other.

Ultimately The Danish Girl’s a worthy watch but not, alas, a satisfying one. The elegance and restraint make for a tasteful spectacle but that surely wasn’t what a story with this much dramatic meat required. The film’s low-key, often rote in its construction, and is too even handed for its own good. Life is ugly, unfair, difficult and populated with unsympathetic characters. Hooper’s film strips out that reality, leaving the residuals. The casualty is drama and pathos.

Correction: Thanks to readers who pointed out that “Lili” was misspelt “Lily” in the original post, but a huge ‘fuck you and please don’t waste my time’ to those that used said error to dismiss the review’s argument. If you disagree with the above you will actually have to engage with the content of the review not just pompously point to spelling errors.

Certificate: 15 for Eddie's Redmayne, casting Sebastian Koch as the surgeon who specalises in lopping off Redmayne's, and another small part for Ben Whishaw.