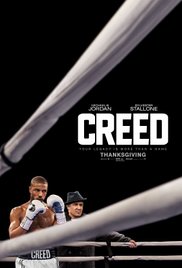 Speaking of the proposed Rambo TV series, Sylvester Stallone told Variety, “I don’t want to cast aspersions but it’s delicate to try to replace a character with his son.” Many presumed his irony bone had snapped as Creed, a continuation of the Rocky series, does exactly that. Michael B. Jordan isn’t the Italian Stallion’s seed of course, but the illegitimate spill of Balboa’s former friend and one time nemesis, Apollo. You’ll recall that Creed Senior was pummelled to the grave by Dolph Lungren’s computer calibrated Russian killing machine at a time when the once grounded series had mutated into a comic book gladiatorial contest between testosteronic supermen; a proxy for the cold war that turned jingoism up to одиннадцать. Now Fruitvale Station’s Ryan Coogler is here to tell a successor story in the real-world style of John G. Avildsen’s original. Is there anything new to throw into the ring? No, and Rocky fans wouldn’t have it any other way.

Creed is part of a new (or should that be old?) wave of thinly disguised remakes masquerading as post-modern sequels to the iconic hits of yesteryear. Like The Force Awakens and Jurassic World, the new Rocky copies its forebear’s template precisely, while adding variations that ostensibly complicate the narrative by exploring old characters or situations from new angles.

Like Balboa before him, Adonis (improbably named despite being the bastard son of a man he never knew with an equally silly name and one would imagine, bitter mother), is from the wrong side of the tracks (a spell in “juvie”), has dreams of fighting his way to respect and prestige, and looks to an old but reluctant boxer with health problems to provide old school training and facilitate his shot. Following setbacks in his private life, include tussles with new girlfriend Tessa Thompson, Creed Junior eventually gets his mind in gear and everything builds to his world title bout in which a man his experienced opponent has dubbed a young pretender, gets to prove himself. In other words this is the movie you’ve already seen – both the gritty and self-parodic versions – with Stallone’s Rocky the new Burgess Meredith (though on growth hormones). Does it matter? Not a jot. The formula still works, even if every setback, pumped up training sequence and ringside punch recalls the older, fresher film.

Coogler’s strategy is to keep the action character-focused and the fights fast and visceral, in a bid to make a regurgitated meal look like a fresh dish. It doesn’t quite work. Jordan, solid as he is, doesn’t have Stallone’s gentle giant charm, and Ludwig Göransson, though he keeps the tempo high and the orchestral accompaniment suitably pumping, is no Bill Conti in his pomp. But everything that made Rocky work – the simplicity, the aspiration, the heart – is present in Creed and pays the same dividends, albeit at a lower rate. Modern touches, on-screen stats for fighters, the role of pay TV in setting the terms of fights, makes it contemporary, but the new Rocky’s much like the old, with the major boon for fans of the original being Balboa’s moving asides on lost friends and family in the autumn of his years. Should Hollywood be searching their script pile for a new hit – a story engendering the thrill of discovery for today’s audience? Undoubtedly. But until then, solid sequels will have to do.

Certificate: 12A for no footage of Ivan Drago, Philadelphia's decision to move Rocky's statue, and Liverpool accents.