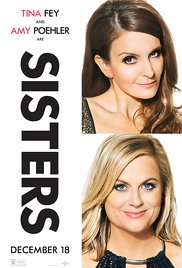 Tina Fey and Amy Poehler’s new comedy may not be funny but at least they had the decency to include a character that people like me can employ as shorthand for everything that’s wrong with it. The girls stage a house party, a last hurrah in their childhood home on the eve of sale. Amongst the old faces to show up uninvited is Dwayne, a boorish try-hard, self-ennobled joke machine – “always on”, according to a weary Fey, who doesn’t know the difference between trying to be funny – silly voices, pop culture riffs, affected madcap zaniness, and wit. “It’s exhausting” lament the stars, and right they are, but this is their movie: a comedy built on oddball turns of phrase and lashings of shtick.

From the sketch-like opener, with Poehler mistaking a resting workman for a bum, to an agonising scene built on the mispronunciation of a Korean nail technician’s name, a testament to improvisation’s diminishing returns, Sisters lays it on thick – killing each and every comic setup by overplaying. It’s no good setting up a few melodramatic beats in the first Act, abandoning them for over an hour of frat house humour, then returning to them at the end, in the hope that audiences will be fooled into thinking they’ve witnessed an emotional arc for the characters. Real world feeling has no part in a movie like this – it’s just for show.

Sisters represents everything that’s currently wrong with American movie comedy. Much like Paul Feig’s recent efforts, notably Spy (with all the foreboding that generates for the forthcoming Ghostbusters reboot), Jason Moore’s movie exists in a heightened comic universe in which everything is subordinate to conspicuous gag making. Given the right context, a genre spoof like Austin Powers for example, the approach can pay dividends; we enter a world that’s flagged as ridiculous and in which there are no rules.

You go to these movies not to be moved or intrigued by human relationships, just to be overpowered by unadulterated silliness. But in a so-called real world setting, in a movie that’s allegedly about something – in this case being infantilised, embracing adulthood, paternal responsibility, etc – a grounded tone, with the comedy generated from pathos and wit and character, maketh the film. Think back to the ‘80s for example, and every comedy you ever truly loved – perhaps the likes of Steve Martin’s Roxanne or even the original Ghostbusters, and you can see funny characters bestriding an approximation of the real world, surrounded, both for technique and contrast, by straight men and women, who power the jokes. Sisters is 100% pure lewd shtick and like Dwayne, the in-movie proxy, it’s exhausting.

For the purposes of illustration compare two performances from Dianne Wiest, here cast in a thankless role as the siblings’ put-upon mother. A quarter of a century ago, in Ron Howard’s Parenthood, she played another mother, coincidentally struggling with a couple of wayward kids. Parenthood’s a funny movie but it’s also a grounded movie. Wiest’s Helen Buckman had great comic moments, accidently picking up her daughter’s sex pics from the pharmacy instead of her holiday snaps for example. She had the feel of a real person; an archetype to whom we could relate. In Sisters her job is to be “funny” – gurn a bit, swear a bit, facilitate a joke about grey fucking. But there’s no dimensionality to her character, or indeed anyone else’s. She’s just there to set up punchlines (or deliver them).

Sisters is built on this philosophy. It’s populated with archetypal turns designed to be got in fast; disposable people in a disposable movie. The unfunny one’s unfunny, the stuck-up girl from college is a stuck-up adult, the Asian one’s kooky and quiet, and so on.

So Sisters invites you to bite down on two long hours of sketch comedy, hung on a story. There’s no wit in it and no human beings. But fans of bawdy jokes featuring pubic hair, rectums, tits and the like, will find much to enjoy, though they really shouldn’t.

Certificate: 15 for mock-sentimentality, noise and wasting the considerable talents of Dianne Wiest.