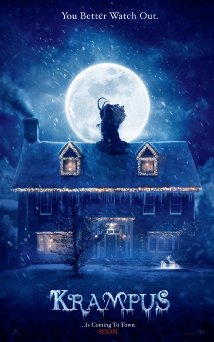 Krampus, the evil anti-Claus that instills perennial terror, is arguably a monster metaphor for the terrible Christmas movies that audiences are subjected to each December. How many sickening families resolving their differences over the festive season can you endure, and how many more are to come? Well Michael Dougherty’s yuletide horror comedy is here to make things right, subjecting one such dysfunctional brood to a seasonal rear guard action against a horned, child-stealing demon who comes to punish those who’ve forsaken the Christmas spirit. As Dougherty makes clear by early allusion, this is A Christmas Carol for Poltergeist fans with more than a chunk of National Lampoon’s Christmas Vacation thrown in for good measure. A heavy, eye-fattening confection then, but satisfying all the same. If the Griswold kids had torn up their letter to Santa instead of grinning and bearing it for the sake of their idealistic Dad, then the result may have been something like this – a flick that just about makes the transition from broad holiday house comedy to b-movie nastiness, without falling apart.

As Dougherty makes clear from the outset, Krampus’s target is the obnoxious commercialism and odious forced-family solidarity of the festive period; a time that’s both punishing and empty for all but the spoilt bastards who benefit on Christmas morning. Emjay Anthony, son of Tony Collette and Adam Scott, is just young enough to still believe that Christmas matters but loses heart when Aunt Allison Tolman’s family of survivalists and Middle-American idiots impose themselves in the run up to the big day. Dougherty mines plenty of bile and embarrassment from this early portion, revelling in the kind of class and generational conflict that characterised John Hughes’ effort of yesteryear. But with the arrival of the titular monster, the movie shifts into another gear – the realm of home invasion and bad spirits, which countless Poltergeist copycats have traded on in recent years.

It’s a sudden shift, both in tone and content, that could have been better foreshadowed, but once settled in its new groove, Krampus is as loud and over indulgent as the best Christmas excesses. Most evil spirit home invasion flicks spend an interminable amount of time teasing shocks with background shadows and slow tracking around corners: not this movie. It’s boisterous and inventive, with a great sense of fun that’s manifest in several wry setpieces, not least an attack from a loft full of demonic toys.

The result’s a humanitarian parable about the values of the festive season, that undercuts its own preachiness with irreverence, wry cynicism and a lot of good old fashioned genre cruelty. Jolly viewing indeed.

Certificate: 15 for jokes at the expense of fat kids, excess snow, and the absence of Chevy Chase.