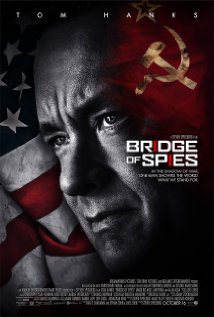 Little’s been made of Bridge of Spies being Steven Spielberg’s lowest grossing movie. At first sight, a poor showing for this well-made cold war thriller, with its old school dissolves and Jimmy Stewart proxy, the so earnest it hurts Tom Hanks, seems inexplicable. Spielberg’s technique is to pack intrigue and movement into every shot, to harness the awesome reconstructive power of Hollywood to fashion a period piece that looks and feels absolute authentic, to build his characters and story with care and fidelity to the era’s realpolitik.

It’s a glossy movie without glamour and we enjoy watching it tick over but then we realise – there’s no impetus, no pace. Spielberg for all his skill can’t animate a Coen brothers script that uneasily combines espionage, court room (and back room) tribulations and breezy humour. At 141 minutes it’s just too damn long; a movie that bets the house on the interplay between an all-American archetype and a reserved, fragile looking traitor who walks and sounds like a bank clerk. You like these characters, you want to know more about them but that’s all you get – the promise of more. That’s not enough in a film built on legal conversation.

Still, Spies may be a misfire but it’s must for those looking for an orientation in a time of duelling empires, nuclear threats and life behind the iron curtain. One senses that Spielberg pictured the movie like a ‘60s Hitchcock, full of danger and personality, but there’s little sense of the former and perhaps not enough of the latter. Hanks is fine as lawyer James Donovan, an apple pie on legs, but he’s a poor audience proxy, never appearing to be under quite enough pressure, never concerned enough for the lives of those he’s seeking to trade for a plastic American pilot who by rights should be languishing in the gulag for disobeying orders.

We’re left with middle-ranking Spielberg, a feeling compounded by the substitute stylings of composer Thomas Newman, who doubles for an absent John Williams, delivering the kind of musical cues he imagines the old master would drop in for his long time collaborator. The effect is one of deflation – you’re both aurally and psychologically underwhelmed. It’s not that the film’s bad per se, it’s just that the cold war used to feel more immediate and less wholesome. It used to have a bit more grit. What we get is the kind of movie that will make great Sunday afternoon viewing one day and that’s not quite good enough for a filmmaker and cast with this pedigree.

Certificate: 12A for legal chat, nothing much happening for an hour, and a PhD student who didn't pay the extra couple of marks for a copy of his thesis.