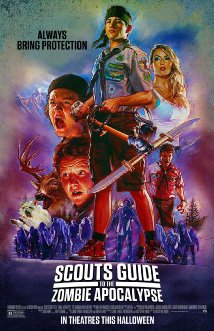 Dongs of the Dead

Despite pockets of resistance – AMC’s The Walking Dead, 28 Days Later, World War Z, the humble zombie has long been redundant as a means of putting the willies up an audience. The idiom’s carefully chosen, as Christopher Landon becomes the latest director to play up the kitsch value of the lumbering undead, by using them to add schlock value to a genre other than horror for comic effect – in this case the bawdy teen sex comedy. Edgar Wright spliced zombies with a rom com, Cockneys Vs Zombies used them to pep up the British gangster pic, we’re soon to see Jane Austen improved with the cannibalistic automatons in an adaptation of Pride and Prejudice and Zombies, and here’s the undead seasoned with tits in the hope that the sheer, bloody incongruity of it all – because you’ve never seen a hormonal boy grope Zombie breasts before, will generate big laughs. The Scouts‘ Guide to the Zombie Apocalypse is a one joke movie, like all genre splices before it, but it’s a good joke – if a little laboured; a comedy with a contagious sense of fun.

In Tye Sheridan, Logan Miller and Joey Morgan, the movie has three likeable leads, whose characters are given a little space to do something other than flaunt the story’s lewd schtick. The problem, is that the film’s frat humour opens the door to an unreconstructed world in which women are either unobtainable princesses or sluts, and all the boys’ idiotic assumptions about sex go unchallenged by someone who could have mined their misogyny for laughs, say a woman imported from reality.

Landon may argue that Sarah Dumont’s pole dancer – the de facto forth member of the troupe is that feminoid, but she’s really just a world weary pair of mammaries with a hard luck story. The boys grow to respect her, natch, but only for the insight she can provide on getting laid. The movie’s denouement offers a joke about a revenge fuck – Sheridan’s mother for Miller’s sister. So the movie recalls ’80’s movies like Porky’s, a movie that remembered its apostrophe, in attitude as well as tone. Sexual retardation is a staple of teen sex comedy of course, but without in-movie challenges it’s also a celebration of the same.

Scouts Guide… may be backward but it’s not lazy. The screenplay (two of the writers are women, folks) has some nice comic set ups and a few jokes that reward mid to long memories. In a movie where the best you can hope for is enough irreverence and silliness to justify the ticket price (though not wit, obviously), Landon succeeds in generating a few belly laughs and many more lip curls using these very tools. To boot there’s eye pleasing gore and appalling, old school puppetry – in other words, all the stuff that good bad movies are made of.