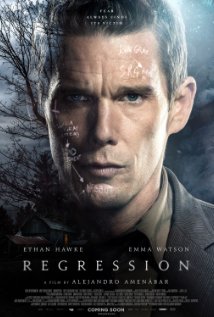 Alejandro Amenábar’s period thriller (yes, 1990 is a period now), is an oddball experience; a film with a terrific and thought provoking central idea, apparently ripped from the headlines, that unfortunately can’t quite find the right tone, consequently flirting with schlock with indecent rapidity.

Naturally we approach any movie about Satanic cults with some trepidation, particularly one that reconstructs the alleged crimes from repressed memories, and this skepticism is important, but for the longest time Regression plays like a stupider movie than it is thanks to characters that say things like, “I hate it when you’re always right” and “the memory’s like its own universe”. This is misdirection, as it turns out, for the stupid characters really are stupid and the outrageous secret that bedevils, pun intended, this autumnal Minnesotan backwater, truly outrageous. But by the time this creeps up on you, with a pensive and increasingly disturbed Ethan Hawke finally coming to his senses, the movie’s burnt up a lot of goodwill, appearing to be a fusion of Hot Fuzz and Young Sherlock Holmes without the humour that bolstered both.

That the movie exudes a certain seriousness which its screenplay manifestly can’t support, is a shame, because Regression’s structuring theme – the idea that sensational media coverage psychologically conditions consumers to believe in the very monsters it purports to investigate, is a fascinating one, worthy of a more coherent treatment than Amenábar can provide.

False memories, bogeymen from popular culture, fiction that feeds itself – these are Regression’s foundations, and in Emma Watson, the vindictive teen who harnesses these satanic forces, in the figurative sense you understand, to punish her provincial and oppressive family, the movie offers a different kind of villain – one that sadly Watson can’t quite invest with the same memorable heft as Edward Norton brought to his rug puller, in the DNA sharing Primal Fear.

Sure, it’s an underwritten part, and yes, it odiously buys into another myth, namely that women lie about rape and abuse, but Watson could surely have done more with it had the screenplay given her more time to develop the character. Instead we share Hawke’s journey into Hammer Horror stupidity, and whereas this is necessary in light of the revelation that his mind’s been impregnated by the worst excesses of the press and drool box, it adds up to a mystery that’s lacking in the very psychological nuance required to sell that final, jaw-dropping reveal. The result’s a movie that won’t live long in the mind, shrink or no.

Certificate: 15 for David Thewlis's glasses, a case predicated on missing babies when none have been reported missing, and packet sauce mix.