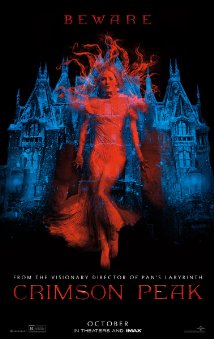 Crimson Peak may be the most lavish and sumptuous adaptation of the best Victorian gothic horror novel never written. Early on in Guillermo del Toro’s feast of vivid (and narratively ordained) colours and ornate production design, a great compendium of stuff in the best traditions of Victoriana – the antique, impractical and uncanny – Mia Wasikowska’s would-be novelist alludes to Mary Shelley. But if that’s supposed to be a marker for what follows, the cue’s too modest. In the crimson vats that line the basement of Allerdale Hall, we can imagine a ghastly puree of Charlotte Brontë, Du Maurier, Bram Stoker and Wilkie Collins. In a movie where the sets fester and the air’s alive with particulates, it’s not such a leap to imagine those authors’ secretions; they permeate the story and shape its narrative.

The danger for a movie like this is that it struggles to be more than the sum of its many influences. Any story set in a highly stylised and part-expressionistic 1901 will be informed by the present and the totality of every riff on 19th century sensationalism ever put on screen. Wasikowska’s Jane Eyre-like heroine, a shoe-in for picking the wrong man and making the cardinal mistake of following him to his country pile of secrets, is named Cushing. That’s about as big a hint as they come that what ensues is going to flirt with schlock as well as literary impressionism.

Fortunately, Del Toro’s too shrewd to trade on modern horror clichés. Instead, and gratifyingly, Crimson Peak remains focused on its doomed love story; a very old fashioned vehicle for marital suspense and buried horrors, in the Rebecca tradition. Recent del Toro flicks have privileged the aesthetic and junked plot, but Peak’s literary underpinning provides a foundation much stronger than those propping up Jessica Chastain and Tom Hiddleston’s family home. For a while it feels like the marriage of ghost story and Bildungsroman – the latter partnered with mystery, isn’t quite working. The elements feel disparate. But Peak rewards patience. When del Toro finally pleats his threads, the result is a revelation as deranged and deviant as anything in Brontë’s imagination.

Unsurprisingly, given its gothic horror pedigree, Crimson Peak often recalls Francis Ford Coppola’s Dracula – a film that took the same joy in ostentatiously flaunting its mock-Victorian credentials. But whereas Coppola insisted on in-camera effects and pre-digital composites, in a bid to tether the production’s methodology to the analogue era of filmmaking it birthed, del Toro’s flick brings CGI into the equation. Inevitable perhaps, but it’s also often conspicuous. Pixels feel intrusive in this world. They’re just another tool for telling the story, del Toro would argue, but if Peak’s a triptych made from superb costume design, tremendous setcraft and computer animation, the latter’s the weakest of the three.

Still, when a movie flatters the eye like Crimson Peak, and can boast a compelling, if insane central mystery, then it’s easy to forgive the flaws. There’s enough substance and intrigue here to compliment Guillermo del Toro’s plumb aesthetic. Fans of its constituent novels will flock to see it, but they’ll stay for the cinema – as rich and opulent as anything you’ll see this year.