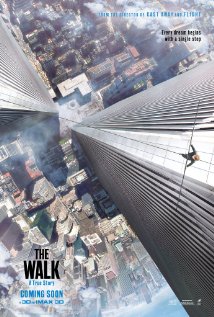 The Walk’s a strange beast. For two thirds of its running time Robert Zemeckis’s biopic of wire walker Philippe Petit is directed like one of his computer animations. Perhaps in a bid to capture the flamboyance and heightened sensibility of the man who walked between the twin towers of the World Trade Center, back in the days when you could do that, Zemeckis chose to make the movie a creature of his digital sandbox, reasoning a grounded tone would be somewhat antithetical to his subject’s philosophy.

Artistically this makes perfect sense of course, but here Zemeckis comes close to making the same mistake as Tim Burton in his recent Big Eyes – making a movie about real events, dramatizing real people, that plays like a cartoon. Whimsicality is fine in bursts, but Joseph Gordon-Levitt’s narration from his perch on the Statue of Liberty, coupled with irreverent direction and all manner of virtual embellishments, leaves the eyes dancing but the brain undernourished. Petit, constituted uncritically for the most part, comes across as a bit of an arrogant cock. Only knowledge of the pay off keeps us engaged.

But what a pay off. The final act of Zemeckis’s movie shows that he’s nigh on peerless when it comes to the realistic use of visual effects technology. The destruction of the Twin Towers, perhaps the central character in the story, looms large over the enterprise, not least in scenes that discuss Petit potentially falling to his death from their once imposing heights. However their recreation here, thanks to some truly astonishing work from Atomic Fusion, brings the buildings and plaza that once framed them, back to life with a fidelity that’s both mesmerizing and mournful. Seeing Petit navigate his way around the site, the paint not yet dry on both structures, is curiously touching. You want to view it as a period piece alone, but foreknowledge of 9/11 adds a poignancy and, perhaps, majesty to the photorealistic rendering, that can’t be denied. You feel every storey of those awesome erections, and that sense of awe only primes you for the eponymous climax – a set piece that for once is not oversold.

Perhaps only Zemeckis could utilise the modern filmmaker’s toolkit with such confidence to produce a minor cinematic miracle – a climax that puts you on the roof of both towers and convinces the audience they’re up there with a part-insane Frenchmen who didn’t sign up to the survival instinct. One can’t overstate how impressive the final twenty minutes of The Walk are, particularly when viewed in 3D. This critic hates heights and has a physical reaction to them – a tingling in the extremities – presumably blood leaving limbs for essential areas, and got the same feeling looking down through Zemeckis’s virtual camera. In a seen-it-all-before era, one has to pinch one’s self as we sit between two buildings that sadly no longer exist. The technical achievement is outstanding, the tension harrowing. You take every step with Petit. One can only imagine what the real man felt watching this reconstruction of his finest hour.

If the movie’s not quite successful at explaining the impetus behind the insanity (we have to settle for he’s arrogant, driven and fearless) and cavalier when tying up biographical details, it is at least, compelling and might have been more so had those first two acts walked between realism and the audience.

A sentimental coda, lamenting the loss of the towers, is indeed keenly felt, if unnecessary, but that shouldn’t detract from Zemeckis’s celebration of the lost New York landmark and the man who gave these monuments to capitalism a human face. Did he, as is suggested, make New Yorkers love them? That may be overstating it, but Petit’s stunt is a positive and literally uplifting reason to remember them – a counterpoint to death and destruction. For that and its technical virtuosity, The Walk is a very fine spectacle indeed.

Certificate: PG for vertigo, the french, and stepping on nails.