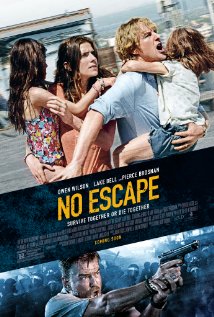 Where there's a Wilson...

The hell of being the face of an American company exporting aggressive US capitalism, indeed economic imperialism, in an unspecified Asian nation that looks a lot like Thailand on the day that revolutionary forces, aggrieved at your company’s takeover of the water system, execute the friendly dictator in charge and set about murdering Western tourists, though they hate you in particular as you’re on the company’s promotional hotel conference banner, is explored in John Erick Dowdle’s fist-chewing thriller. Owen Wilson, whom we used to turn to for easy laughs, is that man: an affable average Joe with a steak and eggs Texan family in tow, who does a grand job of making us like him, then sharing in his absolute fucking terror, as the aforementioned mob lay siege to the symbolically named Imperial Hotel, and lay waste to their country’s hospitality industry.

Dowdle’s film has no interest in subtlety and lays on its politics with a trowel. To underline the point that the collusion of corrupt governments with US big business conspired to ruin Wilson’s holiday, Pierce Brosnan features – sporting a rugged London accent that initially makes you suspect you’ve walked into one of Wilson’s old comedies by mistake. Brosnan’s a former British agent whose spy games helped install the friendly-to-Western-interests puppet ruler that the armed population now despise. “These merciless men are, like you, trying to protect their families,” he tells an unconvinced Wilson, and whereas it’s true the Texan’s required to suffer all manner of indignities to protect his brood, including killing and throwing his kids from a roof, his rear guard action can’t quite be morally reconciled with indiscriminate rape and murder.

No Escape is a bracing and nasty thriller that grips early and never quite lets go. Ever so often the would-be stylist in Dowdle intrudes on the action, bouts of slow motion only serving to break the spell rather than focusing the attention as he intended, but for the most part the sense of unfolding chaos and the family’s panic is tangible. When it comes to resisting the temptation to sexualise Lake Bell, Wilson’s suitably terrified and later brutalised wife, Dowdle isn’t quite up to it. Her cleavage is on display nearly as often as the inhumanity. Nevertheless the movie’s taunt and well-paced, even taking the opportunity to add an anti-US coda to its exhaustive critique of capitalism unbound. Which country saves the day? Why, communist Vietnam!