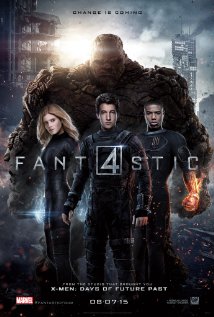 It’s been three years since Josh Trank caught Hollywood’s attention with Chronicle, effectively a superhero blockbuster with a found footage gimmick, delivered for a cool $12m. When you can orchestrate thrills and handle complexed visual effects on that budget, the suits responsible for tentpole franchises stir in their hot tubs, send away their hookers and take notice.

Trank took the studio shilling. Now the world of big-budget filmmaking, with its creative constraints and executive interference, has destroyed him. News of on-set bust ups, sometimes known as creative differences, a funereal atmosphere at assembly cut screenings, and emergency reshoots, combined to taint Fantastic Four with failure months ahead of release. Fox then poured kerosene on that chatter by withholding the movie from critics. In an age when online buzz, or lack thereof, can decide a movie’s future long before it’s locked, keeping Trank’s flick under guard was tantamount to the worst review of all. The movie itself became an afterthought.

When examined sans the internet cladding, Fantastic Four isn’t the worst movie of the summer. It’s not the culture crime trailed. That honour will go to Pixels. Trank’s movie, in contrast, is watchable for the duration – breezy until the tone shifts uneasily and without authorial flagging toward outright horror, and competently assembled. A mess of a movie is one that lacks narrative coherence, that has no organic through line from start to end. Four plays well enough if your mind’s elsewhere. The structure’s discernible. What’s missing, and what kills the picture, is the story detail and plot development that turns a ’80s-style comic book film in which one thing happens after another without reason and corresponding audience interest, into the occasionally more sophisticated genre movies of the present. Trank’s film has been stripped to the bone, cut off at the waist and bolted onto a generic third act confrontation that’s over before the thinking on the inciting action that preceded it has begun. The result’s a filleted flick that shorn of its guts, duly splutters and dies.

When confronted with a movie that’s been butchered in this way, you can’t help but wonder if the frustrated filmmakers, strangers in their own production, psychologically projected onto some scenes in their lowest moments. Sue Storm talks about how music works – patterns of sounds that build certain expectations in the listener. You anticipate the changes and this brings the pleasure. Was this inserted as a plea to the studio’s editors? Fantastic Four‘s audience anticipate a meaty second act, one that builds on the character sketches of the distended first, with those lumbering relationship hints and the promise of awry science threatening the planet. Instead, once the leads have been transformed into their mutated personas, there’s a mad and maddening rush to the finish, with barely enough time for the team to assemble before being dragged into a clash with a villain whose motives remain a secret.

A movie that’s over just as it’s hitting its stride is one thing, but Trank’s movie, or whatever remains of it, has sunk long before the premature conclusion. We’re never sure why a leading scientific institute would be scouting at a school science fair, or why four geniuses would feel aggrieved at not being able to test their teleportation device and spearhead a trip to an unknown realm, when such a trip would obviously endanger the only people who understood the science (hence the invention of the astronaut), or how Victor Von Doom survived for a year on an arid planet with no food and water, or why he wants to destroy the verdant Earth, but the answer to these questions and others probably lie on the cutting room floor with Josh Trank’s fingertips.

Ultimately Trank’s folly is a movie without sense or human interest. How ironic that a filmmaker so clearly influenced by ’80’s genre movies (Back to the Future Part II, Explorers and The Fly are all alluded to here) should end up having his name on a picture that evokes the worst of that decade’s comic book offerings. Perhaps there was a brooding, emotionally dense panel movie here once upon a time; a film with a mind to explore the dynamics of a dysfunctional family in extremis, but the studio hacked it to death and left a rump with too many lines drawing ill-advised attention to the flick’s teen-centric approach. “They made it ugly,” says Reed Richards, looking at the machine that forms the centrepiece of Act 3. Yes son, they did.

Certificate: 12A for existing so the studio can maddeningly hold onto the rights, so fleece Marvel at some future date, Reed Richard's missing glasses in the second half, and a villain who can make heads explode but choses not to use that power on the only enemies who can stop him.