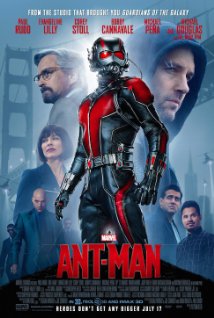 Marvel’s astute handling of Ant-Man’s production ensured the movie opened with confidence sky high in the finished product. The studio allowed the mercurial Edgar Wright and Joe Cornish, filmsmiths with excellent genre pedigrees, to develop the movie for the better part of a decade, then ditched them at the 11th hour. This shrewd piece of firing sent a clear signal to fans that the interwoven aspects of Marvel’s Cinematic Universe, the commercial scheme, took precedence over any single filmmaker’s vision, no matter how ambitious. Those worried that Wright and Cornish would bring their trademark eccentricity, wit and inventiveness to the movie, were duly reassured. Ant-Man would be just another link in the chain – nothing too outlandish or distinct, containing the requisite scenes to set up other movies, and thank heavens for that.

The finished flick, heavily rewritten by star Paul Rudd and one-time Wright replacement, Adam McKay, has none of Wright’s kinetic direction or Cornish’s dry wit. It is, you might say, a more American affair with tongue-in-cheek humour that’s a touch more blunt and sentimentality that might have been undercut more frequently in the original script, or plain excised. There’s a great deal of invention and intrigue in the visual effects, achieved with a combination of microphotography and computer animation, but the lifesized portions lack a distinct visual signature. Peyton Reed utilises whip pans and dolly shots in montage sequences but this is tantamount to the new, unpopular King doing bad impressions of his beloved predecessor in court. No one wants to be reminded of Wright and what could have been. It only makes Reed’s slick but confected movie look that much more routine.

That isn’t to say that Ant-Man doesn’t hang together; it’s a perfectly well constructed entertainment; just that the versioning’s more conspicuous than anyone would have wished. Certain sequences, most notably Scott Lang’s confrontation with a member of the Avenger’s B-Team, practically carry the corporate watermark, but the real disjuncture is between content and style. Reed’s film is packed with great ideas, anchored by a heist plot that grounds the high-concept lunacy, but they feel truncated somehow. There’s the sense that the Quantum Realm, the microuniverse of Hank Pym’s nightmares, might have been more than a “don’t cross the streams” device in Wright’s story, or a sequence like the fight inside a falling briefcase, digetically scored by a playing iPhone, was one amongst many quirky setpieces, delivered with more madcap intensity in a version with the breaks off.

What you’re left with is just another Marvel movie. A fun movie to be sure, with a likable lead and an origin plot that’s simple and focused enough to carry casual audiences, but a flick lacking substance or flair. Ant-Man could have been a mess, you feel; instead it’s a confident repair job, with just a little of the scaffolding still visible. However it lacks both the artistic touch and character traces that would have transformed it from an episode into a movie. If Marvel ever hope to make films that people remember and return to, they’ll have to consider hiring filmmakers who care enough to make movies that stand alone, not just lay the track for the next one to rumble on through.