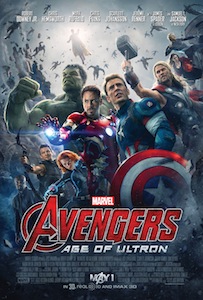 If Joss Whedon’s Avengers was the staging post that marked Marvel Studio’s integrated and overlapping cinematic universe as a box office phenomenon, his second try, Age of Ultron (no.11 in the series for those struggling to stay the course) could be the film people talk about when debating where it all went wrong. The project’s pitfalls are laid bare during 141 minutes of noise and incident; a film that lacks definition, depth and a dramatic arc worthy of a standalone movie. Age of Ultron is what happens when the franchise imperative trumps storytelling. It’s a clear out of old and redundant characters and a fleeting introduction to new ones ahead of further adventures. It’s two and a half hours of prologue.

Perhaps it’s the strain of making a film lumbered with so much baggage, or the fact it’s a transitional movie, but Whedon’s blowout feels laboured, right down to the quips. You can almost hear the suits baying for more spectacle, higher stakes, while reminding Joss that there’s threads to be tied off and new characters to establish, all the while demanding his trademark frivolousness. Well, something had to give and that turned out to be the movie’s spine.

Whedon’s skipping stone approach to plot means that elements vital to piquing and deepening audience interest are rendered as mere impressions – an image here, a quick line of dialogue there, and relax if you were worried about investing in a dramatic moment, Joss is here to undercut it with a drop of drollery. This ride needed breaks but they’re all in the wrong places. We spend too much time watching the Avengers introspect at a country hideaway and none with Tony Stark as he contemplates his motives for creating a potentially dangerous A.I in response to a nebulous threat to planet security.

Whedon thinks it’s enough to drop in the key scenes – Tony’s apocalyptic nightmare, a chat with Bruce Banner about the possibilities, when what’s really required in establishing the threat Ultron represents is the building of tension, a threat to the characters and the world that’s so immediate and so vivid that the audience can accept Stark’s gamble as a necessary punt in the face of a no win situation. But such a set up requires more than the grand orchestration of expensive setpieces; it needs character conflict and groundwork – the stuff that Whedon could only deliver if he was prepared to slow down and scale back the pyrotechnics. There’s no time for that when you have no many marks to hit on the franchise map.

Consequently none of the dramatic beats in Age of Ultron convince. In their stead there’s a changing of the guard, with the villain, whose motives had the potential to be interesting, reduced to a pretext. Perhaps Whedon knows it was all a bit too much which is why he’s stood aside for Winter Soldier’s Anthony and Joe Russo. That’s a smart move because the duo took the second Captain America movie by the scruff of the neck and gave it a little tension and weight. Age of Ultron lacks both and the result’s bombastic background noise. Perhaps the real movie’s on the cutting room floor.

Certificate: 12A for the Scarlet Witch's cleavage, "I totally support your Avenging", and Andy Serkis.