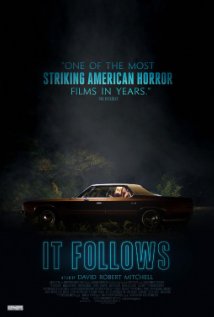 It Follows is the best film John Carpenter never made. David Robert Mitchell, not so much a fan as an acolyte, has appropriated the old master’s predilection for slow burn suspense, a camera that assumes the character of the antagonist, in this case a malevolent shape shifting stalker that only the tagged victim can see, and an electronic score that augments discomfort both non digetically and digetically; the in-movie ambient hum in sync with the characters’ consciousness, getting louder and louder, inducing serious funk.

The classic style is married with the psychologically astute channeling of urban paranoia; the notion that many a person’s experienced in life, not least the ladies, that the man trailing you at safe distance is after you, that the person who stares in your direction from across the street is looking at you. Pure cinema takes these everyday sensations and turns them into sensory battering rams. It Follows is such a movie.

Mitchell’s flick is like a tour of horror standbys – disaffected teens, junk sex, punishment for junk sex, predatory men and mental instability. We’ve seen these tropes many times and we’ve enjoyed them, but what’s pleasing about It Follows is their fresh packaging. The film feels both new and familiar. Familiar, because Maika Monroe’s unfortunate stalkette is every girl that’s ever adorned an urban slasher; new because the monster in question lacks definition and purpose, and is all the more terrifying as a result. A menace that can only be seen by the people it wants is a neat metaphor for paranoia itself, and despite early attempts at establishing rules (inviting talk of plot holes, as Joe Exposition, played by Jake Weary, knows more than is probable about how the killer operates), it’s not clear that anything can fell so intangible an entity.

In fact it’s only when Mitchell attempts to solve the problem of how to fight his viral monster (it’s passed on through sexual contact, so don’t screw around kids) that the movie comes unstuck. He deserves credit for not defaulting to desiccated chestnuts like old books that provide useful instruction on killing demons or a wizened recluse in a fortified house who survived as a child and is on hand to help in the present, but in the absence of these there’s just the half-baked theories of Monroe and friends, and we’re not always clear on why they think that particular course of action is the right one. Consequently there’s little satisfactory payoff for a stressed out audience.

It Follows is a grand horror movie despite the third act’s loss of focus, and an ever better public information film on sexually transmitted disease than those old John Hurt narrated spots on the AIDS virus. Part 2 will surely establish the monster has a twitter account. Remember, you read it here eighth.

Certificate: 15 for decay, innovative stalking, and the flouting of swimming pool rules.