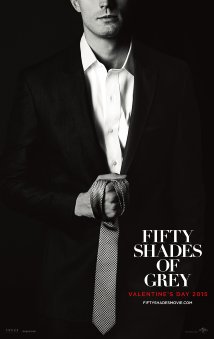 Adapting E.L. James’ 100m selling fucklit phenomenon was always going to be hard. Rock hard, you might say. Ask the women who’ve read it, using a Mein Kampf dust jacket to sheath their shame and present a literary front to the world, and they’ll tell you that its girth is attributable to long and repetitious attempts at winning the bad sex in fiction award. The challenge for the humble filmmaker, in an inherently conservative medium where the censor, and think for a moment why it’s deemed necessary to have one at all, is inclined to treat audiences like sensitive children who’d be warped for life if they saw a penis, is how to adapt talk of sprung erections and lines like, “Don’t worry,” he breathes, his eyes on mine, “You expand too.”

The answer might have been the realisation that the cinematic answer to this silly, trash talking novel, was pure exploitation, and the man to helm such a movie, someone like Paul Verhoeven; a director untroubled by artistic pretensions, who once loved nothing better than material excess and tits. Unfortunately the brain trust behind Fifty Shades the movie has opted to repackage it as an alternative romance; a glossy fantasy for women who fantasise about being handcuffed to wealthy, dominant men. Released on Valentine’s weekend and meekly directed by Sam Taylor-Johnson, the bland style a proxy for the demure and boorish ingénue played by Dakota Johnson, the long awaited film of the book everyone was talking about three years ago is a desultory dud, that swaps out prolonged and explicit intercourse for tame (conceived as tasteful) inserts, padded out by the troubled relationship between a straw man and blow up virgin.

So Anastasia Steel-e, who sounds like a parody of a Jackie Collins character, may have Daddy issues as her real father died young, the nice but dull Step Dad, we infer, a poor substitute. No, Ana wants a proper authority figure in her life, a man who’ll take charge and spank her when she’s been bad, like the girlish child she is. Unfortunately, the billionaire who fits the bill, Jamie Dornan’s tycoon and sadist, Christian Grey, whom she meets during an interview for her student paper, takes his creepy Father-stand in role too seriously. He wants to control every aspect of her life, including knowing where she is at all times, demanding she take the pill, prohibiting her from smoking, drink and drugs, and buying her gifts in anticipation of sexual abuse. He even expects to be called “Sir”. In other words he promulgates a deeply regressive and intellectually retarded conception of female sexuality that continues to handicap a million and one relationships worldwide; a world when men apply cold logic and authority and women cry, because their boyfriend’s are patronising and paternal and they hate it, except when they want looking after.

Why does Grey get off on punishing the women in his life and treating them as relief from work stress and receptacles to becalm his inner rapist? Well, aside from some broad strokes, painting an ugly picture of child molestation and physical torture, we never quite find out. That’s a pity because that’s the only thread worth pulling in this otherwise vacant cavalcade of sultry looks, coquettish turns of the head, and big watery eyes, of the kind you used to look into approaching a hitherto untouched girl for a dance in fresher’s week.

In fact, just as the movie looks to be going somewhere, following much of nothing, it ends, and we’re left with that post-coital feeling of profound emptiness and ennui that accompanies any loveless shagfest. The movie, it transpires, only wanted us for our money. Tickets bought, we’re discarded and left feeling used and stupid for believing there was anything there in the first place.

Ultimately Fifty Shades of Grey has little to offer but minor conundrums (such as, why it is compulsory for everyone to wear grey at Grey Enterprises?) and moments of unintentional double entendres; a scene in which Ana and her roommate apply their evening makeup containing exchanges like, ‘All over my face?’/’That’s the idea.’ You’re left none the wiser as to why an allegedly sharp English Lit student (the name checking of Hardy being the only way to invest the story with some literary credibility) would fall hard for a creepy, humourless, controlling sociopath. Yes, he’s a billionaire but his taste for inflicting pain and the cold shoulder on feminoids is the antithesis of Ana’s preferred relationship: dinner, passionate sex between equals and a movie. That said, be careful what you wish for. What if she got to the cinema and this was the only thing playing?

Certificate: 18 for the hypocritical censoring of Jamie's Dornan, boredom, and a mystery that comes to nothing.