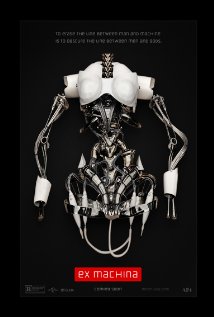 Alex Garland’s better than a pastiche artist but driven by the same instinct, to make new versions of old stories with a contemporary twist. 28 Days Later retooled Zombie movies, making them more visceral and grounded, in keeping with modern tastes, and now he’s at it again with Ex Machina, H.G Wells and Asimov for the Trainspotting generation.

Ostensively it’s a future shock; a cautionary tale about artificial intelligence, but as Garland’s movie progresses it’s clear that he’s riffing on the Island of Dr Moreau; a mad scientist who’s bent technology to his ends for ultimately nefarious purposes. This A.I scientist’s genius has been spent on pursuit of creating a woman farm; a place where the man’s social retardation and his sexual fantasies collide. It’s a pity that a tech genius has to be a sexual deviant; a controlling, misogynist arsehole who’s poured time and money into building supplicant ladies; but would the audience understand a Zuckerberg who wasn’t a pervert with a god complex?

The conceit’s also gravy for Garland who can brush past odious and outmoded assumptions about gender and sexuality, of the kind likely to infuriate feminists who’ll rightly point to the clunking patriarchal guff underscoring each choice, painting said thinking as the cultural conditioning of a lonely man. Sure, we could argue that such a genius may have used this once in a lifetime opportunity, the ability to create sentient and intelligent beings, as a chance to rethink behaviour conditioned by culture and biological imperatives, but then he wouldn’t be able to get his primitive rocks off.

Garland the director’s learnt much from Danny Boyle, inheriting his penchant for awkward characters, the clash between serenity and the sinister and an almost ambient electronic score. It adds up to a movie that’s mood and atmosphere with a judicious pinch of social commentary. If those notes in the margin aren’t altogether convincing, the set up fares better. There’s undoubtedly something uncanny about two paranoid strangers in an enclosed space and on that simple, human level, Ex Machina is an efficient creep show.