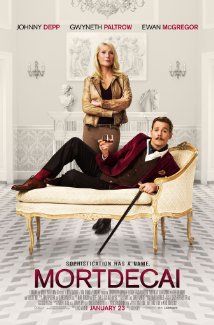 Mortdecai’s a frustrating watch. It’s a movie you can see taxiing for laughs but refusing to take off. It just sits there. Everyone mugs and tries hard, affecting enjoyment, but they’re dying on camera and worse, they seem to know it. The Terry Thomas inspired Charlie Mortdecai, gap toothed and libidinous, played by the remains of Johnny Depp, is first unwatchable, then, when you get used to him, moderately agreeable; a benign idiot you can tune out; but he’s not funny.

Characters like his – zany, larger than life, unreconstructed, require an endearing sponsor, a touch of genius. There can be little doubt that Depp and director David Koepp had in mind Peter Sellers and the likes of The Pink Panther and After the Fox, but the result’s closer to his Casino Royale, right down to Mark Ronson’s Burt Bacharach pastiches. There’s a chasm between grounded character comedy, touched by impeccable timing, and a kook gurning for the camera. Depp can’t even trump Paul Whitehouse in this flick, let alone one of the greatest comic talents of the 20th century.

With its art theft underpinning, international jaunting and off the wall mentality, Mortdecai recalls that other notorious misfire, Hudson Hawk. Audience’s fled from that one, suspecting an ego trip disguised as movie. It, like Depp’s film, was a live action cartoon with a flippant bent. But what Willis had which Depp doesn’t, was a script that played to his strengths as a comic actor – a vehicle for some very well-honed shtick; a monster that begged to be fed one liners. That, one suspects, is why history’s been kind to the Hawk in a way it manifestly won’t be to Depp’s Farquhar. Hawk showcased the best of Willis, Ace Ventura gave Jim Carrey a licence to do his thing. Mortdecai makes Johnny Depp look awkward; the miscast centre of a broad farce. Were Kyril Bonfiglioli’s source novels funnier? Sadly, the will no longer exists to find out.

Perhaps it would have worked better as a period piece; a formal throwback, rather than a stylistic one. In that event the audience would have had licence to enjoy the boy’s own misogyny and the imperialist hangover of a cossetted nob. Instead it gives you pause. Frequently stopping to take stock in a film built around a single joke about a man’s love for his moustache and his wife’s nauseous aversion to the same, is a laugh killer if ever there was one. A year ago Lionsgate Chairman Jon Feltheimer predicted Depp’s turn would spawn a new franchise, but perhaps he hadn’t seen the rushes. Instead he’s lumbered with a bit of bad art that he’ll struggle to sell on.

Certificate: 12A for witless hijinks, over egging the pudding, and jokes built on facial hair.