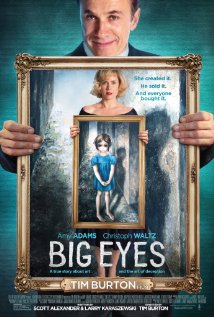 Every so often an attempt to reverse engineer the creative decisions taken behind the movie camera leads to total and humiliating defeat. Case in point, Big Eyes, the latest chapter in the haunted afterlife of Tim Burton. On paper it’s the unpleasant true story of a talented but demure artist who shacks up with a fraudster and unwittingly becomes his cash cow when he takes credit for her work and sells it to the world while she labours in secret, becoming increasingly estranged from her young daughter and muse. On film it’s a colourful cartoon.

Margaret Keane’s tale is one of exploitation and subjugation that for all its artistic cladding is one of the oldest yarns in the world; a man manipulating a woman for reasons of self-interest at the cost of her happiness and independence. You’d expect such a story to be told in an appropriate register, each scene invested with dramatic weight, the emotional and psychological fallout underscored with due melancholy and the impress of the filmmaker’s anger, but you’d be wrong. Burton’s take is heightened, comic and whimsical; it’s a like a children’s fable. The result is bad art.

Writers Scott Alexander and Larry Karaszewski have fashioned a thudderingly literal screenplay that robs the story of ambiguity or understatement, opting instead to spell out exactly what’s going on in each scene, complete with the vocalised thoughts of each character. The lack of light and shade alone would have made Big Eyes slight, but supplemented by Burton’s direction, that favours theatrical overstatement and comic gurning over realism, the story’s dramatic meat is desiccated.

Christoph Waltz, hired on account of his off-creepy, smarmy shtick, has no trouble convincing us he’s full of shit, but as the villain at the heart of a true story he’s less a credible domineering husband and charlatan, more Disney bad guy in a live action role. Amy Adams does her best with an equally underwritten part, with little to do but cry and look sullen, but it’s impossible to know which tears are hers and which are for the camera. With no fire between the leads and little more than a sketch of their marriage, it’s hard to care what happens to either.

Big Eyes is a highly mannered and empty movie that robs its story of the very things that made it worth telling in the first place. Burton, it seems, will carry his absurdist take on human relationships through any scenario, consequences be damned. Kitsch is the word Terrance Stamp’s art critic uses to describe the made-to-order painting Adams is forced to produce, and that’s not a bad review for his fictive universe either. At the end, rather than being touched by the plight of Adams’ painter, you’re left wondering if Tim Burton’s been taking the credit for Helena Bonham Carter’s directorial career all these years, with this latest bomb being the result of a woman who wanted to give up years ago but wasn’t allowed to, so did the worst hack job she could.

Certificate: 12A for tonal lapses, Christoph Waltz's mouth and the further death of a former Hollywood stylist.