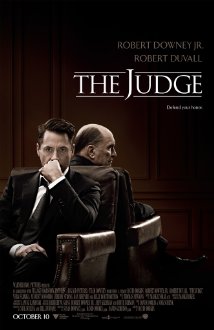 The Judge is a prestige project for star and producer, Robert Downey Jr; a movie meticulously planned to garner praise for its leads, respect for its subject matter – for there’s nowt more affecting than a wayward son helping his proud old Dad cope with the undignifying effects of terminal cancer – and plaudits for its emotional punch. The problem, as this introduction suggests, is that these manipulations are a little too conspicuous. The film signposts its beats and hits them square on, like the proverbial hammer. In fact the only surprise in this long, though generally engaging melodrama, is a risqué bit of incest; a refugee from a previous draft, perhaps, that somehow made the screen, possibly at the insistence of Downey Jr, who realised his flick was very fine but terribly dry and needed a little spice.

Fans of the star, hoping to see plenty of charming, spoilt bastard shtick, won’t be disappointed. But David Dobkin’s film also promised a little courtroom intrigue, and there it was resoundingly mis-sold. The movie takes its sweet time setting up the backstory of a dysfunctional family and the seeds of Downey and Robert Duvall’s estrangement. No problem there, that’s gloriously old fashioned of it; but as the movie progresses, steady as you like, it’s clear Dobkin’s more concerned with family melodrama and the interplay between the leads than the in-court fireworks and the great hook that underpins the story – namely, a local judge of great standing and forty years services, accused of murdering a yokel from his judicial past.

The case is kept simple, so as not to get in the way of the arguments and the longing stares, and ultimately we learn it’s only relevant in as much as it hits a reconciliatory beat between father and son. This moment, clocking in around the two hour and ten minute mark, feels curiously redundant. The territory it illuminates has already been covered and with greater force in an earlier confrontation. We’re left pondering one of those clockwork universe plots in which every incident, no matter how innocuous, dovetails into the main narrative. It’s all so neat and emotionally satisfying – you can practically taste the salt in Downey’s tears.

So in the final judgmental we have a movie overlaid with the odd, laboured comic moment, thanks to the flippant pedigree of its Wedding Crashers director, that looks great thanks to Spielberg cinematographer Janusz Kaminski, and is poignantly scored, courtesy of a sleepwalking Thomas Newman, but never sweeps us up. What’s missing? One has to say surprise and dramatic red meat. There’s plenty of drama, but as m’ learned friends will know, being pedantic about precise definitions and terminology, that’s not quite the same thing.

Certificate: 15 for Billy Bob Thornton on autopilot, a man with learning difficulties deployed for emotional effect and incest.