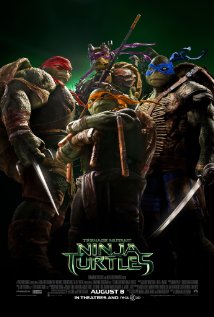 Given there’s never been a good run of Turtles movies (the 1990-93 series was hardly distinguished), it’s perhaps surprising how much apprehension existed ahead of this 21st century reboot. The source of the anxiety can be summed up in two words: Michael Bay. With a record of directing puerile, imbecilic, loud, emotionally retarded, degenerative, eye-straining entertainment, fans of the mutoid crime fighters (for they’re popular with today’s young apparently) had cause to fear whatever the fucking-the-frame merchant would impress on the material.

As producer, Bay’s fingerprints are indeed all over the finished flick: there’s the leering male libido, the lead feminoid as masturbatory aid, and the heroes talk like they’ve been lobotomised, but it’s a lot more benign than trailed. Jonathan Liebesman, last seen orchestrating Battle: Los Angeles, has given the movie a lot of pep. It’s a slick, kinetically powered enterprise. Unfortunately, he’s also remade The Amazing Spider-Man.

At the time of writing it isn’t known if Marc Webb and Sony Pictures intend to sue Bay and his retinue, but if they did, they’d surely have a watertight case. Aside from the horror of knowing that someone watched the Spider-Man reboot and added notes to the pad marked, “How to create the perfect blockbuster”, it’s just plain depressing watching a flick that’s a nigh on, beat for beat retread of a reheated franchise movie.

They key elements retooled for this Turtle-fest are an origin story, linking a dangerous and long dormant piece of research to the heroes’ creation, a family link to said research (here, given the unlikelihood of a multi-species brood, Megan Fox’s reporter is substituted, her Father being the mad scientist, the turtles her Dad’s experiments), the villain’s plan to contaminate New York City with a mutagenic gas and, in what surely must be the laziest plot lift in living memory, the use of the exact same antennae on top of the exact same building, to deliver the payload. One day Andrew Garfield will watch this movie drunk and wonder why the TV people have cut him out and substituted a gang of reptiles. Oh yes, and there’s reptiles.

For those who haven’t seen The Amazing Spider-Man, there’s little to trouble you here. The movie zips along, has a couple of decent setpieces, not least a snow covered mountain chase that’s well programmed (if a might overlong), but the script’s a dog. The turtles aren’t smart enough or funny enough to make engaging heroes, Megan Fox, still trapped in her Transformers hell, has little to do but gawp in torturous close up or have her co-star Will Arnett (disastrously inept comic relief) ogle her bottom, the motives of bad guy William Fichtner make no sense – his desire being to first “reclaim victory” (from who?) and later, when it’s clear that’s a little abstract and not enough to hang a movie on, to become super-rich, even though he is already.

In short, it’s gormless stuff – a bad lot exacerbated by a bloated Whoopi Goldberg and a lot of brazen product placement. But the worst thing about Teenage Mutant Ninja Turtles is that it makes you nostalgic for the good ol’ days of Vanilla Ice’s Ninja Rap, and that, no discerning cinemagoer can forgive.

Certificate: 12A for letching, Pizza Hut endorsements and copyright theft.