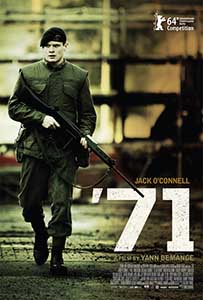 At first sight ’71, a troubling film about the troubles in Northern Ireland, seems like a departure for Dead Set director, Yann Demange. His best known TV work was a satirical take on so-called reality television, in which Big Brother contestants became mindless zombies. The notion of ordinary people turned into bloodthirsty, instinct driven, homicidal monsters, incapable of rational thought, is one easily transferred to the streets of ‘70s Belfast. We’re reminded at the outset that it’s still, ostensibly, the country of young solider Jack O’Connell – it’s still the United Kingdom (whatever it says on Gerry Adams’ homemade passport), but when we get there it’s a lawless, bilious brown pit of despair; a town where freshly minted bigots throw their excrement at the self-styled peacekeepers, and mothers tell their sons off for trying to beat a man to death, rather than taking a pound note from their purse.

’71, afforded the luxury of being able to take a retrospective glance at this dark chapter in British history, is deathly serious in its attempt at being fidelitous. Cinematically, this means appropriating a style conative of the period – the colours of an old photograph, hand held takes – that grainy, gritty, lack of polish that marks out thrillers of the era. Thematically it’s taking a God’s eye view of the political and social turmoil on both sides of the community fault line.

This of course, is a modern imposition, for no such evenhandedness would have been possible in a contemporary account, but it underscores the film’s documenting credentials and its noble intent, namely to dramatise without prejudice. The film’s more interested in the politics of war, rather than the specifics of the conflict; the idea, to paraphrase Richard Dormer’s ex-army medic, now living in a republican stronghold, that rich cunts use stupid cunts to kill poor cunts.

This is brought into sharp focus in the implied parallelism between O’ Connell’s abandoned grunt and Barry Keoghan’s republican teenager, Sean, both of whom are unwitting puppets of Sean Harris’ British army turf war profiteer. Both are recruited killers serving a mercenary chain of command that’s more interested in feathering its nest than winning the headline battle. It’s not that a moral equivalence is being suggested, rather the absence of morality. Demange’s film is discomforting because it portrays the conflict as one of attrition between sides both corrupt and corrupting. O’Connell’s innocent, trained for service in Germany, only to be unexpectedly reassigned, is overwhelmed as he becomes a reluctant pawn in a zero sum game featuring an army that colludes with unionist paramilitaries and pays off republicans.

Ultimately ’71 forces us to reflect on just what kind of war it was. Not a good war, we’re encouraged to think, just a mire of sectarian hatred, bred bigotry, gory pragmatism and moral turpitude. War is both the excuse and thought terminating justification for this anything goes conflict. A sometimes difficult watch, then, but the palpable tension, both in-story and moral, more than justifies the discomfort.

Certificate: 15 for early pub closing, inappropriate alarm clock use and kids with guns.