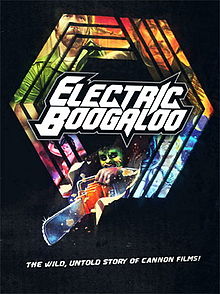 Would you fuck this monkey?

From director Mark Hartley comes a story so absurd it must be true. To afficandos of bad movies, many of which have become bywords for the excess and Reganite fascism of the 1980’s, Cannon Films, spearheaded by the the pair known affectionately as “the bad news jews”, Menahem Golan and Yoram Globus, is the kite mark of kitsch; the gold standard for movie madness by which all other independent producers must be judged. If, as suggested in this often hilarious trip down the piss and blood stained cobbles of memory lane, the Weinsteins’ Miramax is the modern day quality sequel to the Cannon Group, no one would dare argue that Harvey and Bob are as affectionately regarded as Golan and Globus. Bankrolling Quentin Tarantino is one thing, getting the likes of Invasion USA, 10 to Midnight and Delta Force made using money raised from junk bonds, is quite another. It’s into this world the film jumps, consequences be damned.

Hartley’s astute movie recognises that even if the world can agree that Delta Force 2: Operation Stranglehold and its ilk staring one of the two Chucks, Norris and Bronson, are never likely to be met with critical acclaim, the story behind their production has got to be worth telling. How the hell, we’re entitled to ask, did a pair of Israeli conmen, sorry movie producers, infiltrate Hollywood and manage to crank out thirty films a year at their peak, none of them good, featuring some of tinsle town’s biggest names: Faye Dunaway, Elliot Gould and Michael Dudikoff?

Electric Boogaloo, a title snatched from Cannon’s gloriously camp sequel to Breakin’, the movie that unleashed break dancing on a fragile American youth, seeks answers using testimonials from the people who were there. From still exasperated MGM executives to embittered actresses (Laurene Landon burns her only copy of America 3000 on camera), everyone with a Cannon experience lines up to laugh, curse and do impressions of Menahem Golan as they recall baring witness to the tumultuous internal dealings of the bullshit factory.

In ancedotal terms, much gold is mined. Producer Boaz Davidson recalls being told by an excited Golan that Cannon were going to make a sequel to one of the greatest American films of the 1970s. The Godfather Part III was his guess. “Close!” said Golan. The movie was Michael Winner’s rape-a-rama, Death Wish II. In fact when it comes to balls out misogyny and poor judgment, there’s no shortage of stories. Star Trek’s Marina Sirtis, encouraged to bare her breasts on camera, was denied a coat between takes as it would allegedly interfere with the lighting. On the set of 1987’s Going Bananas, Cannon’s belated response to Clint Eastwood’s orangutang movies, Golan allegedly asked an actress, “would you fuck this monkey?” We’d have every reason to believe he was joking if this wasn’t the same man who’d threatened a tired pilot with a loaded uzi on the set of Delta Force.

To Hartley’s credit the film, despite the wealth of damning evidence against Cannon, isn’t a hatchet job. He strives for balance, wringing begruding admiration for Golan and Globus’ sheer tenacity and sincere, if misplaced, love of movies, from the same people who, you sense, still can’t quite believe the pair made as many as they did for as long as they did.

Interspersed amongst the frequently hilarious clips, on set horror stories and so incredible you can’t believe it actually happened production mishaps (Golan was furious when Sharon Stone was cast in King Solomon’s Mines, despite allegedly asking for her – “who is this fucking bitch?”, only for it to transpire he meant Romancing the Stone’s Kathleen Turner) is the story of a cowboy operation, driven by hubris alone, that lived beyond its means and, for a time, modestly suceeded, despite the taste black hole at its heart, due entirely to the industrious zeal of the men some dared call “Mayhem and Urine”.

Demented though it is, not to mention an instruction manual on how to make movies without any apitutde or instinct for the same, Electric Boogaloo is an affectionate look at a company that, for all their mistakes, came to represent the business end of the film making experience. The movies may be terrible by any conventional yardstick, and the real story behind the shady business practices that ultimately blew the company away remains largely untold for legal reasons, but it’s impossible to watch Hartley’s retrospective and not feel just a modicum of envy when presented with two blunderbuss chancers from Tel Aviv who wanted to make a movie featuring erotica in the trenches, or a blockbuster about arm wrestling, and did. Who amongst us, if we only had Golan and Globus’s gall, wouldn’t do the same?