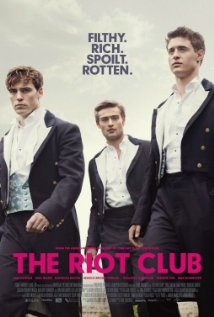 In a two hour upper class shock, the only thing missing from The Riot Club is the absence of the closing caption, “that was a party political broadcast by the Labour Party”. Laura Wade’s Bullingdon Club burlesque (though how exaggerated is open to question), imagining the privileged hell, mire of entitlement, snobbery, misogyny and arrogance from which our current Prime Minister and those who’d depose him emerged, is a blunt force attack on the ruling class, delivered with a firebrand’s zeal. The targets aren’t just mocked, they’re eviscerated and I can think of no film in recent years better calibrated to stoke the anger of audiences watching from coke stained seats.

The source play, Posh, was better natured, enjoying the absurdity of the Oxford gentry in the first half before turning ugly in the second, but the film adaptation is less interested in enjoying itself, rather incrementally ratcheting up the discomfiture to the point where we’d happily sterilise all the eponymous characters.

Even Miles, the socially empathetic Westminster boy who’s initially flattered into joining the club, only to become a reluctant participant once events turn, is a problematic protagonist. Fleshing out his theatrical incarnation and giving him a charming, middle class girlfriend from a northern town, “a boot strap” in club parlance, is a risk because it makes his membership of the club harder to understand. As social acceptance turns to horror and Miles is exposed as a spineless Farquhar who remains, in part, a prisoner of his privileged upbringing and attendant prejudices, we realise that his function is not to provide us with a sympathetic character at all, rather illustrate why social liberal voices have failed to seize the imagination of their silver spoon peers: they’re outnumbered, overpowered and lone wolves don’t want to be left behind. It’s right that Miles ultimately loses his grounded and kindhearted love, having learned his lesson, but we’re instantly reminded that his place will be filled and the club will endure. Aspirant members and establishment lifers demand it.

The coup of both play and film is to use the simple setup of a club dinner in a country pub, the rioters in one room, the inconvenienced plebs in the other, as the perfect metaphor for how the country’s run. Hateful, pompous shit Alistair, distilling hereditary prejudice, has a tongue dripping with poison as he laments social mobility, working class envy and the petty bourgeois tendency. He’s quick to ridicule the (not for nothing) working class Scottish landlord who takes a “bribe” for business lost thanks to the group’s behaviour. That £150, is, we realise, every top down initiative designed to bribe people to vote against their own interests from Thatcher’s right to buy to patronising New Labour tax credits as a substitute for full-blooded redistribution. How can the proles complain when they’re so easily bought off? The point hits because the truth behind it is so vivid. The rest of the club’s drunken peacocking amounts to a commentary on establishment attitudes to welfare, by way of women and equality of opportunity. You’d need a lot of mouthfuls of a ten bird roast to take the bitter taste away.

We encouraged to read a great deal into the public house that’s wrecked by this gang of bullies and spoilt rich kids, and their establishment friends who’ll ensure they’ll never be held to account for it – the old boy’s network of legend. To hate the political class is one thing, but The Riot Club seeks to remind the audience that politicians, though occasionally recruited from modest backgrounds, are transient compared to the permanent cabal of narrow, publically educated, cookie cutter Oxbridge alumni that supply the arteries feeding power and influence in British society. Sometimes they and our MPs are one in the same; sometimes they’re the judges that ensure they fulfill the promise of their birthright unencumbered. Alistair, the loathsome buck with pushy parents, walks away from the movie with a satisfied grin on his face and well he might; he’s protected for life. He’s David Cameron in waiting.

The movie’s staunch pessimism and sinister underbelly make it a tough watch. It would nice to believe that such a group of imbecilic miscreants didn’t exist and that such people would never get their hands on the levers of power, but the film stoked a memory of the performance of Posh I attended. At the end, a group of 17 year olds left the theatre, grins affixed, chortling at what we’d seen. “That’ll be us next year,” said one. He’ll be a first year undergraduate by now. Sweet dreams.

Certificate: 15 for damage to Oxford University's reputation, bad manners and being nasty to Holliday Grainger.