Film Review: A Most Wanted Man 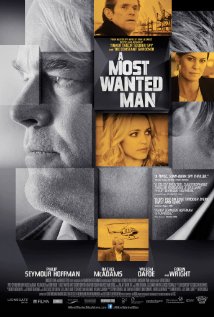 The death of Phillip Seymour Hoffman inevitably looms large over this grounded, mature War on Terror thriller, immersed in the gloom of 9/11 terrorist Mohammed Atta’s old stomping ground, Hamburg. It’s a real world import that ensures there’s great scrutiny on this, one of his last complete performances. There’s a sense of “last chance to see” permeating the enterprise. It adds to the air of despondency.

Fortunately, Hoffman’s grouchy, slovenly, chain smoking counter-terrorist spook – the kind of unaffected everyman beloved of creator John le Carré, is assured and imposing. In the final moments he walks out of shot and Hoffman, out of our lives, and we’re left saddened that he won’t be there to anchor and deepen movies like this one in the years to come. That’s not to say Hoffman isn’t well supported in a spy flick that relies on counter espionage talk and cat and mouse machinations to sustain it’s tension, rather than viscera and violence, it’s simply that his character, and indeed his character’s politics, dominate.

Le Carré’s story isn’t so much about rooting out and foiling terrorist plots, rather differing approaches to managing the threat. Hoffman’s a seen it all before pragmatist, who thinks two moves ahead; a Smiley-like wise head; whereas Robin Wright, the friendly face of the hawkish CIA, is an ideologue – one of many anxious to dictate the direction of Hoffman’s pursuit of a probable al-Queda middle man. It’s not quite as binary and simplistic as European caution versus American aggression, but Hoffman’s gruff point man is the silent type for a reason; he’s a thinker, and the film asks you think with him as he tries to impose cold logic on a series of increasingly jittery players.

If eighty per cent of Anton Corbjin’s film is politics, the rest is atmosphere. The Hamburg of A Most Wanted Man is brooding and overcast. The reduced palate and use of surveillance footage place it firmly in the post-9/11 world, whereas the choice of locations – seedy bars, brutalist office blocks and dilapidated tenements, ape the Eastern European environs of old Cold War thrillers, inducing that same sense of alienation and unease.

Phillip Seymour Hoffman had more accomplished performances; material that asked him to delve deeper and give more than he’s required to do here, but A Most Wanted Man‘s a fine swan song for an actor who could do more with a look and exasperated outburst that many of his contemporaries. Little wonder then, that he was coveted by  directors with the same zeal as his character shows when hunting his troubled jihadist.

Certificate: 15 for Rachel McAdam's fluctuating accent, dour hamburgers and the best use of the word "fuck" this year.