Film Review: Before I Go to Sleep 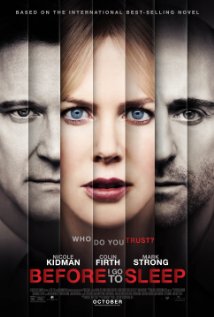 S. J. Watson’s 2011 amnesiac novel, a sleeper hit on publication, has now been adapted to the form that might have inspired it – the prototypical Hitchcock movie thriller. I’ve not read it, you understand, film critics wait for the cine-version so they don’t have to read, but if the movie’s anything like its source, then perhaps the novel was another missive from planet hype. Rowan Joffé’s flick is fine, but so contrived as to be wholly unbelievable; it is in short, the quintessence of a story that’s been constructed rather than told.

The film’s an assortment of tropes familiar to suspense connoisseurs. There’s a vulnerable woman and a glut of unreliable men – some negligent, some untrustworthy. As Nicole Kidman’s got a mayfly memory she spends the movie trying to work out which are hopeless and which are dangerous, exploring the psychical hinterland well-trod by the women in the audience who digested the original novel in sympathy with the controlled and manipulated protagonist, now munching popcorn while their boyfriends shift uneasily in the adjacent seat. Poor Christine, we think – her husband, Colin Firth, is shifty and guarded, while her Doctor, Mark Strong, creeps around her, subdued and precise, like a sexual predator. Who’d be a woman with memory problems, reliant on men, eh?

Joffé exploits the premise’s underlying unease fairly efficiently, but no more. One presumes that Watson’s novel has done all the heavy lifting, in terms of the plot’s architecture, so all that remains for Rowan is to peel back the layers on cue, gradually unravelling Kidman’s opaque back story using titbits, clues and character revelations. It’s all done in mechanical fashion – by the book, you might say, therefore without tension, until finally, the movie switches from flat potboiler to out and out insanity; the kind of third act that works fine, provided you, like Kidman, have a hard time remembering the details.

The final act pits the movie against logic, in a dust up that logic’s sure to lose. We’re asked to believe that Colin Firth is Kidman’s ex-lover, who bludgeoned his girlfriend, then broke her out of the care home her husband (who was trying to protect his son from the emotional trauma of a cyclically demented mother, or some such) put her in, assuming his identity and using her amnesia as a ruse to keep her captive and dependent.

Somehow Firth has kept her family and friends at bay, and her location hidden, for four years; the real husband’s lack of curiosity as to what became of the wife discharged in his name, proving to be a huge help. But it’s Firth decision, fearing discovery, to take Kidman back to the airport hotel where he brutally beat her about the head once before, that signals this is the kind of story someone’s mapped out in a jotter without first considering whether any of the characters’ actions make sense. It’s very silly indeed, and one comes away wishing, and yes I’m sorry for going for the obvious gag, that one had Kidman’s neurological affliction and could wake up the following morning with no memory of the screening.

Certificate: 15 for Nicole Kidman's gratuitous backside, contrivances and a final scene that goes on a sentence too long.