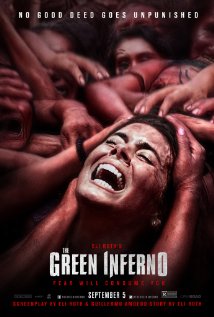 Warning: This review discusses the plot. Those hungry for surprises should wait until they’ve seen this title before reading on.

If Eli Roth’s angry that his Amazonian cannibal movie has been pulled from US release, he can take heart from knowing that he’s in good company. His movie’s spiritual father, Ruggero Deodato, didn’t get a stateside house to screen his found footage foray into the barbarism of lost tribes for five years. If both movies are unpalatable to distributors, perhaps because now, as then, they think watching people eaten alive is a hard sell, then that’s where the similarities end.

The story of Cannibal Holocaust and The Green Inferno is the tale of two different approaches to horror filmmaking. The first took the genre seriously, had artistic pretensions (albeit muddled), was conceived to cause moral outrage, and was so astute in appropriating documentary technique for maximum effect that it could land a director in court, charged with the murder of his cast. The second sees the genre as a knowing delivery system for bawdy social satire and indulgent schlock. In an age where we’re seen it all before, there’s little to do but riff on the old hits.

Roth’s wheeze is to take Deodato’s film and import a critique of modern student activism; the kind of campus based cliques, self-righteous, deathly serious, distributing fliers when they should be sexually experimenting, campaigning on issues they know nothing about, that apolitical, self-interested kids despise. Roth imagines a scenario, surely absurd, in which Lorenza Izzo’s Justine, a Columbia freshman, joins the cult – sorry, group, lead by Ariel Levy’s David Koresh-a-like, based on little more than his noxious charisma and a leg crossing lecture on female genital mutilation.

Part aroused by the group leader and part desperate to be seen to want to fix something, anything, she agrees to help him and his fellow do-gooders stop Amazonian deforestation by flying to Peru and chaining themselves to the JCBs of a logging company. The one scenario likely to cure these naïve hypocrites of their idealism, thinks Roth, is if they were to escape the evil militia that walk arm in arm with the tree choppers, only for their plane to crash and the group to fall into the hands of the hungry tribe those evil Westerners were all set to displace. How’s that for a fresh cadaver stuffed with irony?

It’s a very funny idea of course but therein is The Green Inferno’s Achilles heel; it’s a tongue in cheek movie only occasionally prepared to go all the way and have that tongue cut out. There’s fun to be had in the gore effects (though Roth shys away from vaginal barbarism, no woman on a stick man he) but it’s content to be a black comedy, sacrificing Deodato-style discomfort for macabre and sometimes silly comic setups. The result is a film more concerned with inflicting a screen revenge on middle class martyrs than terrorising its audience.

In fact it’s remarkable how guileless a movie about savages cooking westerners really is. Roth may spend the better part of 100 minutes marking politically engaged youth as fatuous, self-interested, pampered and ridiculous but he’s also conscious that some of his audience will feel those tribal tools close to the bone. He subsequently tries to have it both ways. Izzo’s Justine forms a close bond with a native boy who shows her the cannibal’s innate humanity. Once she escapes she’s therefore quick to tell her Dad’s UN colleagues that the group that dismembered her friend alive and fed another to killer ants, are a benign and peaceful people. That’s right, it’s not for us to judge, it’s all relative and we should leave them in peace, though if we’d felt that way throughout Roth wouldn’t have had a movie. Mixed messages are the new horror.