FrightFest Film Review: Drew – The Man Behind the Poster 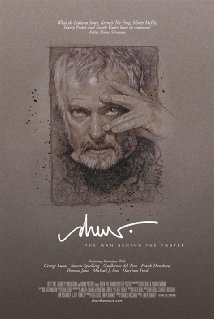 Moviegoers of a certain age will be familiar with the art of Drew Struzan. He’s the nominative determined pencil and paintsmith behind a string of famous one sheets, amongst them – the iconic image of Michael J. Fox looking aghast at his watch on the Back to the Future poster, Indiana Jones and the Temple of Doom, the Police Academy series and, er, the Star Wars Special Editions triptych, but we’ll not embarrass him any further by underlining the association.

Yes, if you were a fan of those vintage promos that provided a static montage of the movie’s principle action and characters, each sized according to their relative importance and contractual stipulations, a style George Lucas called “the people mountain”, so thank God he’s not a writer, then Struzan’s artwork is already part of your pop cultural landscape. But who is he? Erik Sharkey’s documentary tries to find out.

If you accept the movie’s contention that poster art is dying in a ditch, and it’s hard not to when one sees the predominance of dull photographic reproductions that pass for movie posters these days, then this is a revealing look at one of the trade’s most successful and enduring artists: a man out of fashion in an age of moribund, mercenary marketing.

Sharkey shows us a reserved man, awkward on camera, who graduated from illustrating album covers, Alice Cooper’s Welcome to my Nightmare amongst them, and found favour with an industry attracted to his realist depictions of characters, augmented with an otherworldly sheen. It’s that magic, Sharkey suggests, ventriloquising contributors like Leonard Maltin and Steve Guttenberg, that ensured his longevity. If we associate Struzan with the golden age of Lucas and Spielberg, it’s because no artist, with the exception of John Alvin (painted out here), better married the magic of their movies with complimentary artwork.

Struzan put you in the picture, set the tone and modeled expectations, and a grateful industry paid him handsomely for it until they realized that Photoshop could knock up a one sheet in an afternoon and undiscerning cinemagoers were indifferent to the drop in quality. In poster art, as in musical composition, Hollywood stopped trying when their focus groups told them casual patrons didn’t register the effort. The story of Struzan’s forced retirement is the story of American cinema’s degeneration. If movies aren’t as good as they used to be, and it’s an argument with some force, any investigation would have to subpoena Struzan.

The artist may be reserved but the film reveals he’s not burdened by modesty. Sharkey’s camera shows reticence cloaking self-regard. Often Struzan will refer to his own talent, his “magic” and revels in anecdotes about moments of inspired creativity, not least the evening he created the poster for John Carpenter’s The Thing based on a couple of sentences of information passed down the phone (an account we’ve cause to doubt as the famous image depicts the character’s coats with uncanny accuracy). In one scene he chuckles as he recalls the moment a man he alleged hoarded his early artwork, effectively stealing it, died of a heart attack before he could sue Struzan for making the allegation. The rights and wrongs of the case aside, it’s an uncomfortable moment.

If Struzan seems enamored by his own skill, he’s aided by gushing from the film’s many admirers. Okay, this is a movie that celebrates his work, but it comes at the expense of aforementioned contemporary John Alvin, who isn’t just a glaring omission from the story, but in a couple of instances is actively obliterated from it. As Maltin and Spielberg go moist for Struzan’s E.T and Blade Runner artwork (used for the Final Cut release), “definitive depictions” in their view, they neglect to mention the man whose work was chosen to represent the movies on theatrical release, one assumes on merit. Alvin’s drawing of E.T’s hand touching Elliot’s (a hand modeled on his daughter’s) is surely iconic, so too his image of Deckard, gun raised, over futuristic L.A skyscrapers. Struzan’s coy about the movies he didn’t get first time around, “they gave it to someone else”, but not to talk about that someone and retrospectively relegate their work to runner up status, is a major falsenote in a documentary that ostensibly celebrates the medium.

Still, there are fascinating tidbits and, as we hope for in any documentary, moments of unintentional hilarity caught for posterity. The commentary on Hollywood’s industrial myopia is timely and important, while the moment Struzan meets Harrison Ford for the first time, the former so instrumental in creating the iconic image of the latter, is telling, not least because one wonders why Ford, in thirty years, hadn’t made an effort to meet him sooner. But the real thigh slapper comes during a walkabout with George Lucas at his Presidio HQ. Fawning over Darth Maul, a character Struzan loved to paint, he tells an uncomfortable George he wants to see more of him, apparently unaware that the underused villain was killed in just one of many Phantom Menace missteps. Lucas smiles politely and turns away. Struzan may have created the art but he apparently declined to watch the movie. An egotist perhaps, but, we realise, a pretty good judge all told.