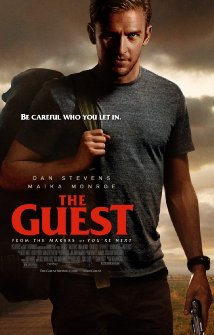 The Greatest Hits of the '80s

The way screenwriter Simon Barrett tells it, he had a script on his hands and it was rancid. “It was just thirty pages of this boring revenge thriller about a solider who destroys this family, and I thought, no one would want to see that,” and right he was, for who cares for movies in which the antagonist’s motives are clear as a bell? Remember Cape Fear? What a turkey that was. Twice!

But when Barrett joined forces with You’re Next director, Adam Wingard, something magical happened. The Guest became a movie about a super solider on the run from the covert military agency that turned him into an inhuman killing machine with trust issues, who goes to stay with the family of a fellow grunt, because he promised he’d check they were okay, or something, thereby risking detection. Of course this blonde haired, blue eyed poster boy for National Socialism could have stayed with any other family in America, and with the military and biographical connection severed, enjoyed a lifetime of anonymity, but then you wouldn’t have a movie, and a very silly one at that.

The Guest may not make any sense, for it’s never one hundred percent clear why a demented killing machine would feel compelled to keep a mawkish promise to a dying man, or indeed who or what, Dan Stevens is, other than plausibly psychotic, but it’s no less fun for that. A conscious throwback to low rent, grungy, early ‘80s movies; the kind that offered titillation, synth and fetishized brutality; Wingard’s flick is an affectionate knock off – the kind of film that should really be on VHS and three day loan for £1.50.

From the archaic title font to the electro-beat score, there’s little to trouble the 21st century. The only things that betray the movie’s modernity are anachronisms like the Internet, iPhones and girls with small breasts. Wingard doesn’t forget to letch, he introduces Maika Monroe in her underwear and gets Tabatha Shaun topless quick smart, it’s just the directors of yesteryear preferred more voluptuous accessories for their male characters.

This is Dan Stevens show and those who were beguiled by him in Downton Abbey will enjoy living out an alternative fantasy here, as he puts his Aryan credentials to good use; studied menace in a toned shell. His camp and commanding version of Hitchcock’s Uncle Charlie carries the film through its various stages, from deranged cuckoo in the nest potboiler to stalk and slash pic, via The Terminator. Indeed, James Cameron could have considered suing at some points in the third act, had he not ripped off Harlan Ellison.

Ultimately The Guest’s problem is that it’s no greater than the sum of its second-generation parts. Wingard’s film is content to be a silly, sometimes tense homage to ‘80s b-movies. What’s missing is the style and wit that would have elevated it to the status of being a great film in its own right. You can build a career remaking your favourite flicks, look at former video shop employee Quentin Tarantino and movie magpie George Lucas, but you’ve got to want to make them better and bolder than the other guys. Wingard doffs his cap, only for it to slip from his hand and blow away.