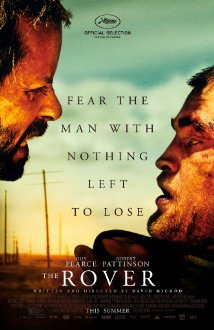 There’s more than an air of Ozploitation about David Michôd’s pared down odyssey. That air’s thick with dust and the smell of dried blood. Wandering through it, a baked ball of intensity and rage, is Guy Pearce’s Eric – an archetypal loner and spiritual heir to Mad Max, who stops for a drink in a future Australia that’s been ravaged by an economic collapse, only to watch as a group of thieves steal his car. His attempt to retrieve it is brutal, often unbearably tense and a rough and ready character study of the kind you don’t see much of anymore. When you’ve got a budget of $12m there’s little room for stunts and visual effects. Poor Michôd is forced to rely on atmosphere and intrigue. The humanity!

If said atmosphere plays a large part in The Rover’s success, there’s more to it than heat and flies. It’s a movie of few words, fashioned like the best Westerns, with the landscape and brooding score acting in tandem to unsettle its audience, while the combustible Pearce does the rest. Michôd’s paces his movie just right, punctuating long takes with emotional and violent crescendos. It’s a deeply psychological film; a story told in close ups and pained faces. It’s also the first evidence that somewhere in the world they’re growing directors from the mixed DNA of dead masters, in this case Sergio Leone and Don Siegel.

The signature of a great performance is the sense that no one else could have played the part. Guy Pearce’s Eric is such a role. He’s the troubled soul of the film. Long before his motives are clear, we’ve registered the hurt, the loss and the futility that marks him out. The brooding tough guy’s a part we’ve seen many times but Pearce sells his variant with conviction, in turn intimidating and heartbreaking.

If Michôd makes good use of Pearce he deserves additional credit for wringing a fine supporting turn from Robert Pattinson as the half-witted brother of one of car thieves, forced to lead the wolf to the door. David Cronenberg’s Cosmopolis proved the Twilight actor could do more than squint, and he makes good on that promise here, equal parts vulnerable and volatile. His initially antagonistic relationship with Pearce, later trusting, forms the uneasy dynamic that anchors the film. Pearce’s feelings toward his captive are often gratifyingly ambiguous, typical of the movie’s propensity to keep its cards close to its chest, making each scene work harder for a memorable payoff.

Ultimately though it’s The Rover’s humanity that makes it superior fare. Pearce’s wanderer is a haunted figure who looks as if he’s lost everything in a society where no one has anything. What, in such a world, could be important enough to hunt and kill for, you ask? The answer forms an emotionally powerful and sobering conclusion to a very fine film.

Certificate: 15 for Robert Pattinson, got accepting indigenous currency and the return of Crucifixion.