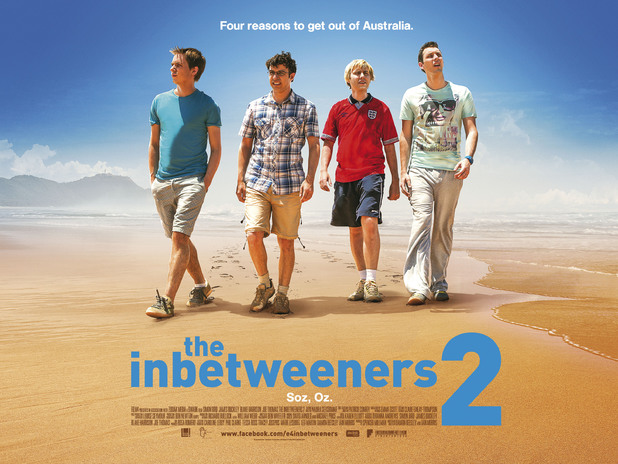 It would be easy to dismiss The Inbetweeners 2 as the arse end of the cinematic experience. On first glance it’s a crude and laboured teen sex comedy, from which all the subtlety’s been carefully excised. If you want to see a dog lick pendulous balls, you’re in luck. Been holding out for a diarrhoeic turd following a kid down a flume and impacting on their face, topped off with projectile vomiting? Then your ship has come in. Yet for all this setpiece horror, Damon Beesley and Ian Morris’ movie isn’t half bad – it may even by half good. How can this be? Well you see, they haven’t forgotten the core of their TV show; the element that gives them licence to show a drop of urine falling from a penis in close up: heart.

The Inbetweeners works because it’s a blunt force retread of teenage social embarrassment, frustration and sexual failure, anchored by four middle ranking archetypes, sourced from real human beings. Most of the population aren’t megastars in the playground nor social pariahs but somewhere in-between, and that’s why anal Will, shy Simon, loveable idiot Neil and preening, serial fantasist Jay strike a cord. If you didn’t know them personally you knew someone who did. The characters are likable and their insensitivity, one-upmanship and vulnerability to social predators are credible. Beesley and Morris know that whatever mortifying situation they put their quad through, chances are the audience have experienced something similar, and it’s little wonder then, that the gang’s real life counterparts turned out in droves to see the first TV spin off, and will no doubt do the same again.

Even the story, which initially looks like another take-a-TV-show-abroad spin off, works, because the Australia holiday has all of the marks of a clueless teenage venture – cultural ignorance, sexual misadventure, a near death experience, it’s all very familiar stuff. Not for me, you understand  – I take my trips on the yacht in the South of France and the ladies present are carefully selected through an agency.

If The Inbetweeners 2 has a problem it’s that it’s almost all surface. As adults trying to reconstruct the perspective of teenage boys, Beesley and Morris are almost too successful, as they’ve taken the decision not to annotate their screenplay with any import from the world of adult understanding. Consequently all the women in this world are animated male prejudices.

Emily Berrington’s version of a certain kind of woolly minded, hedonistic but ultimately self-centred middle class girl, has a high recognition factor but there’s no shade. Tamla Karl’s possessive, aggressive, cripplingly insecure girlfriend also rings bells but there’s no more to her than that. Along the way the only other women we meet is a middle aged hippy and a man hating bunker. When at last we finally come upon Jane, the movie’s human maguffin and ex-girlfriend of bullshitter-in-chief, Jay, she seems human, but has twenty seconds of screen time.

Beesley and Morris will argue that sketches are all most teenage boys have, so all this latent misogyny represents a truth about the adolescent male experience, but they’re not content to have their own proxies be so mono dimensional. Behind the banter we’re lead to think there’s more to these kids than twattishness. Jay in particular, all misogynist mouth and no trousers, shows his true colours when pressed on how much he misses the real flesh and blood woman in his life. If the boys can be human then surely the girls can be too?

Still, credit must go the writing duo for furnishing their movie with well-observed asides and good comic plotting. Wit would have been welcome, after all there’s no reason why the movies can’t aspire to be better than life, rather than merely reflective, but The Inbetweeners 2 is a funny movie with just enough intelligence to justify its 96 minutes.

Certificate: 15 for a glans close up, Australians and spiritualism.